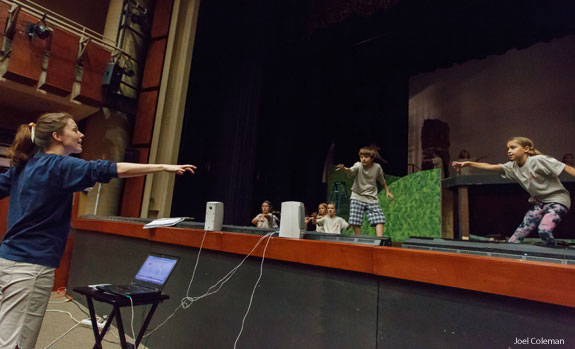 Over 150 elementary to high school students will experience Liberty University theatre firsthand through LUTC and Acting Uncut summer arts programs, in which they will learn to sharpen their stagecraft and participate in a production from a dedicated team of Liberty faculty and students.

The programs are run by the Liberty University Department of Theatre Arts. At the finale of each camp, the participants will highlight their learned skills as they put on a stage performance at Tower Theater.

A team of six Liberty theatre students and recent graduates are assisting in the camp program as a paid summer job.

Jamie Cloutier, a recent graduate of the theatre program, said it amazes her to see how much the children take away from their camp experience.

“They remember a lot more than people realize and they pick up a lot,” she said. “When they leave here they kind of spout out what they have learned throughout the week and it’s really rewarding to pass on that kind of knowledge.”

The Liberty students and graduates help set a bar of excellence, through leadership and example, within the camp, according to Chris Nelson, theatre professor and summer arts program coordinator.

“They get it,” Nelson said of his team. “In a world in which people do not understand socially how to deal with people, or just don’t understand how to go that extra mile to take care of somebody from a customer service point of view, I’ve got that (in these students).”

Nelson said the children really look up to Liberty’s students, especially if they have seen them in the productions. He explained this helps the community identify with Liberty and grow up with it as a part of their life, especially if they return to the camp year after year.

Both camps teach the participants a variety of skills through classes with breakout sessions where they can experiment with what they have learned. They also spend time rehearsing and mastering the play that will be performed at the camp’s finale. Though similar in methodology, each camp has specific goals tailored to the varying age groups who participate.

LUTC has two branches, one designed for elementary age students (who have completed grades 1 through 4) and the other for middle school students (who have completed grades 5 through 8). Both are day camps, beginning Monday and ending with a Saturday performance. The elementary camp is currently under way and the middle school camp takes place next week.

In LUTC, students focus on team building in a fun environment where they learn to work together to put on a show.

Nelson said LUTC seeks to give kids a “taste for how fun theater can be.”

As the participants learn to hone their acting skills, they find their personalities, overcome fears, and build confidence.

“Once you have tackled the stage, you almost feel like you can do anything,” Nelson said.

Acting Uncut is geared toward high school students, and particularly focuses on those who may wish to pursue theater as a career or course of study in higher education. It seeks to not only improve the skillset of aspiring theater professionals, but also to expose them to the rigorous academia and demand for excellence in Liberty theatre. Acting Uncut runs July 7-15.

“We offer up classes that have a lot of variety in them, things that they probably haven’t heard of from their high schools, or things they haven’t really experienced,” Nelson said. “For them it is about furthering their skills and starting to wet their appetite with new techniques, and a different outlook.”

Students take a variety of master classes, in which they learn new skills in voice, dance, acting, and stage combat. This year, to add fun and variety to the program, Nelson will incorporate quarterstaves in the stage combat training.

Acting Uncut is a nine-day, overnight camp where the campers experience a taste of life at Liberty. They stay in the dorms, eat at the dining hall, and utilize the various recreational facilities campus has to offer.

“The greatest example of Christ to them will come through the lives of the counselors and how we conduct ourselves,” Nelson said.

Nelson said he welcomes participants from all walks of life, hoping through his faith and the faith of his counselors, the campers will see Christ and learn to integrate faith into art.

As part of the spiritual development of the camp, the counselors lead worship and give devotionals and personal testimonies on the two Sundays and, more importantly, interact with the campers throughout the camp and invest time in them while in the dorms.

Nelson said it is truly rewarding to be involved in camps every summer for the past eight years (four at Liberty) and to be part of a process that is impacting lives and making memories to last a lifetime.