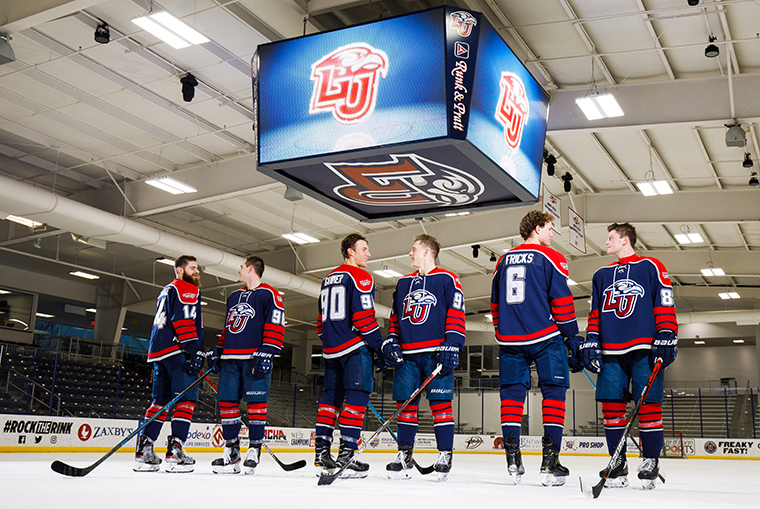 As iron sharpens iron, so do brothers who grow up playing hockey together — in rinks and on frozen ponds that serve as battlegrounds where boys become men.

This past season, Liberty’s ACHA Division I men’s hockey team included three sets of brothers: forwards Andy and Cody Clarke from Ontario, who completed their degrees online in May; rising senior and sophomore forwards Cole and Brett Gammer from Alberta; and rising junior forward Josh Fricks and defenseman Jacob Fricks, a recent graduate from California.

Additionally, former senior forward and head captain Devin Pierce — who had to hang up his skates and move back to Tennessee before Christmas due to a series of concussions — will be replaced by his younger brother, incoming freshman forward Bryce Pierce, this fall.

“It’s a special group of guys who worked hard on and off the ice and added to the culture that we have,” said Flames Head Coach Kirk Handy, who noted that each player was recruited individually. “We want to make sure they made their own choice to come to Liberty, not just because a brother came here; this has to be the environment and culture they want to be a part of.”

Cody Clarke and Jacob Fricks are back in Lynchburg, Va., this week to help with the annual Flames Hockey Prospect Camp at the LaHaye Ice Center, where coaches from Liberty’s Division I, II, and III teams are evaluating talent and looking to land a few more players for the 2020-21 season.

“Liberty has such an amazing program that when people hear about it, they want to come here, too,” Cole Gammer said. “The hockey program recruits for itself, and that’s really apparent when you’re getting brothers or other family members or friends who are interested in coming here.”

On such a tight-knit team, brotherly bonds extended to the rest of the Flames’ hockey family.

“I often forget that there’s so many brothers on the team,” said Cody Clarke, 24, who is a year and a half older than Andy. “We’re all just a big group of friends, that’s how I see it. There’s like no friction in the room. We all love each other and get along so well. The best hockey teams I’ve been on are the ones that get along the best. It doesn’t matter so much about skill. If you get along and like each other and can actually be a team, then you’ll be successful.” 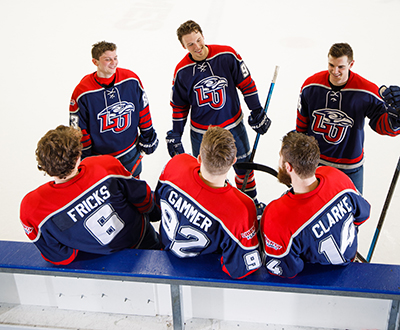 With a class of 13 seniors providing veteran leadership, Liberty ascended to a program-high No. 2 ACHA Division I national ranking, sweeping top-ranked Adrian College at home on Feb. 21-22 and capturing its third consecutive ESCHL regular-season title to earn an autobid to the ACHA DI National Championships. That tournament, set for March 19-24 after the Flames won their third ESCHL tournament championship in four seasons on March 8, was canceled by COVID-19 just days before they were to fly out to Frisco, Texas to compete in it.

As many sets of brothers as Liberty featured this past season, it had even more newlyweds, with many of the teammates extending the Flames’ family bonds by serving as groomsmen in each other’s weddings.

“The hockey world’s a small world, so it’s crazy,” said Cole Gammer, who married his wife Julie before Christmas. “It’s a really tight group. We’ve got guys on the team who are 25 and others who are 19. It’s a wide variation, and it’s really cool to see the dynamic.”

While on his honeymoon, Cole Gammer was replaced by his brother Brett — who joined the Flames for the spring semester after playing the last season and a half in the Saskatchewan Junior Hockey League — on the team’s Jan. 2-10 mission trip to Finland.

“It was an amazing experience with the team,” Brett Gammer said. “I’m happy I got to take that nine-day trip before school started because I already got to bond with all of the guys on the team and by the time I came back to Liberty, it made a smooth transition from junior hockey in Canada.”

Both the Gammer and Fricks brothers are three years apart and have sharpened one another through clashes on and off the ice.

“As we grew up, we were always really competitive with each other,” Brett Gammer said. “A lot of times, our backyard games on the rink got so intense they had to be shut down by Dad.”

The Fricks brothers admit they weren’t close before last spring when they joined the same team for the first time.

“Previously, even when we were both living in the same house, we would always be going in different directions with hockey,” Jacob Fricks said, noting that they had disagreements growing up that resulted in everything from food fights to fisticuffs. “This is the first year where we’re spending a lot of time together. If we didn’t have this opportunity, who knows, 10 years down the road, if our relationship would be what it’s going to be. It’s good that we get to spend a year and a half together and build that bond that will actually last a lifetime outside of school.”

The Clarke brothers were more like best friends than sibling rivals at home in Ontario.

“Growing up, hockey was our No. 1, but we played lacrosse, he played soccer a little bit, and if we had any free time in the wintertime, we were snowboarding,” Cody Clarke said. “Then in the summertime, we loved outdoors camping, too. So we spent a lot of time together, just goofing off.”

Even before emerging as a key scoring threat his senior season, Andy Clarke served as a leader in the locker room.

“Andy’s kind of the comedic central of the group in the locker room and everyone kind of just joins in on that,” Cody Clarke said. “We all find our own unique ways to try to bring the team together.”

It is all part of the refining process players endure as they persevere through the tests and trials of college life, including dealing with injuries and other setbacks. They have learned they can overcome any obstacle or adversity through brotherly love and with prayers of support from their teammates — their brothers in Christ on and off the ice.

“Being around guys every day who have the same goal in life, outside of hockey and outside of school, is important,” Josh Fricks said. “Unlike on previous teams where guys would bring me down, these guys are always going to bring you up. When you’re having a bad day, they point you to where you should be, and if you’re doing the wrong things, they point you to what you should be doing and why you should be doing it. Being able to pray with people every day and have people praying for you, you can tell it is working.”

“On our team, everyone’s a brother,” Jacob Fricks added. “Obviously, we’re brothers by blood, but that doesn’t really matter when we’re in the locker room. Everyone’s each other’s brother (in Christ). When it comes down to it, we’re all here for the same reason, hopefully — to grow closer to Christ and to win a national championship.”

Though they were denied that opportunity in late March, the 2019-20 Flames helped to lay the foundation for a promising future, forged by a faith that extends beyond brotherly bonds to the entire Liberty hockey household.

“The biggest thing we can celebrate this year is the way we grew closer to Christ, seeing even my own brother get baptized this year, along with a few other (teammates),” Josh Fricks said. “That’s something that no national championship will ever bring. We’re not going to have rings in heaven; we’re not going to have trophies in heaven. But if we have our brothers there with us, if we have our teammates there with us, everything here on Earth is left behind.”