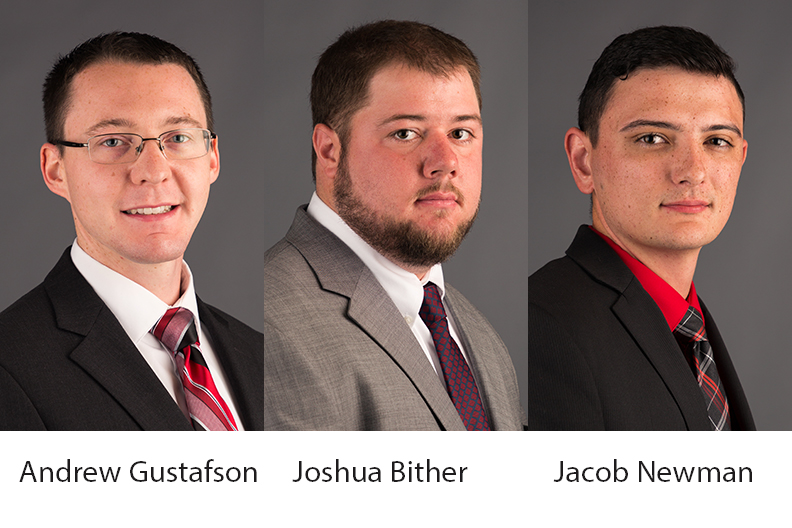 Earning a law degree is a pursuit that requires sacrifice, courage and determination, qualities that three graduates from the Class of 2020 at Liberty University School of Law honed during their time serving with the Virginia Army National Guard.

Jacob Newman, Joshua Bither, and Andrew Gustafson all served in Bravo Company of the 1/116th Infantry Regiment prior to attending Liberty Law. While they did not all serve at the same time, they did serve from the same company located in Lexington, Va.

The three never realized the connection until they attended the School of Law’s virtual graduation ceremony in May, when law professor Tory Lucas led a special military recognition portion in their honor. Lucas spoke on the intersection of military service and the rule of law. “Can there be liberty if no one steps up to defend it? Can there be liberty if there is no rule of law to support it?” he said. “Indeed, Newman, Bither, and Gustafson know that intersection well.”

“At one point in time all of us served with Bravo Company,” Newman said. “Thus, a little-known Virginia Army National Guard unit, from an armory about an hour down the road from Lynchburg, has sent three students through Liberty’s School of Law.” 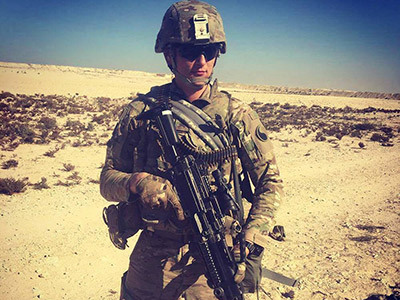 Newman enlisted in the Virginia Army National Guard after graduating from Virginia Tech in 2014 with a degree in political science and a concentration in legal studies. Many of his relatives are either past or current members of the military, so Newman’s enlistment felt like a natural step. He was a Sergeant in the 1st Battalion, 1/116th, Light Infantry Regiment, 29th Infantry Division where he served as both a team and squad leader. He was deployed to Qatar in support of Operation Enduring Freedom Spartan Shield in 2016.

During his time in Qatar, Newman served as a liaison, helping those leaving the National Guard secure gainful employment. That’s when he decided to pursue a career in law. Newman said Liberty was the only law school that accommodated his timeline. He said the desire of the dean and the entire Liberty Law faculty to help students is what he most cherishes about his time.

“I’m still blown away by how everyone there will go out of their way for you and care about you,” he said. “The amount of support they gave through the training and knowledge always showed that they wanted to make you a better lawyer. I will always remember that.”

Newman has been accepted as an attorney in the Army, a Judge Advocate General (JAG), and is currently going through the commissioning process to become an officer. 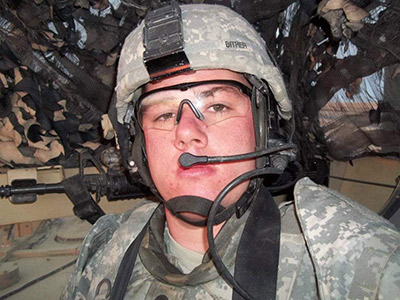 Joshua Bither served for six years in the infantry in the Army National Guard and achieved the rank of Specialist 4. Bither was assigned to Bravo Company in the 1/116th Regiment of the 29th Infantry Division and was deployed to a combat mission to Iraq in 2010 and 2011. He is a decorated soldier and has been awarded the Army Commendation Medal, National Defense Service Medal, Army Service Ribbon, Overseas Service Ribbon, Armed Services Reserve Medal, and Army Achievement Medal, among others.

Bither received his undergraduate degree in International Studies and Political Science from Old Dominion University and was planning on working for the United States State Department as a Foreign Service Officer, but after being told that a law degree would be helpful in that field, he decided to enroll at Liberty Law before pursuing that career. Once at Liberty, he found an unexpected interest in criminal law and plans to pursue jobs in that field while he refines his future plans.

“I’m still looking at jobs within federal agencies including the State Department but because the application process can sometimes take several years, I am looking at jobs in prosecutors’ offices and district attorney offices and we will see what happens from there,” Bither said.

Like Newman, Bither said the faculty was one of the things that attracted him to Liberty’s School of Law.

“I went to visit at one of the School of Law open houses and every professor that I talked to was a recently practicing attorney who has real-world experience,” Bither said. “That meant a lot to me that they could transfer knowledge from the real world and help prepare me to actually work in the field.”

Andrew Gustafson served as an 11-B Infantryman in the 1/116th Infantry Regiment of the First Battalion in the Virginia Army National Guard from 2012 to 2018. Most of his service time was at the headquarters unit of the 1/116th in Lexington, Va. From 2016 to 2017, he was deployed to Qatar with B Company serving with fellow graduate Jacob Newman. His step-father, retired Chaplain Darren King, was a Colonel in the Washington, D.C., National Guard and his grandfather served in the 25th Infantry Division in Hawaii.

Delivering the Military Recognition message during the online annual awards banquet presentation for the Class of 2020, Professor Lucas introduced the graduates “on behalf of a grateful school and a grateful nation.” Lucas likened their military service to self-sacrifice and service, quoting Jesus’ words from the Gospel of John: “There is no greater love than to lay down one’s life for another.”