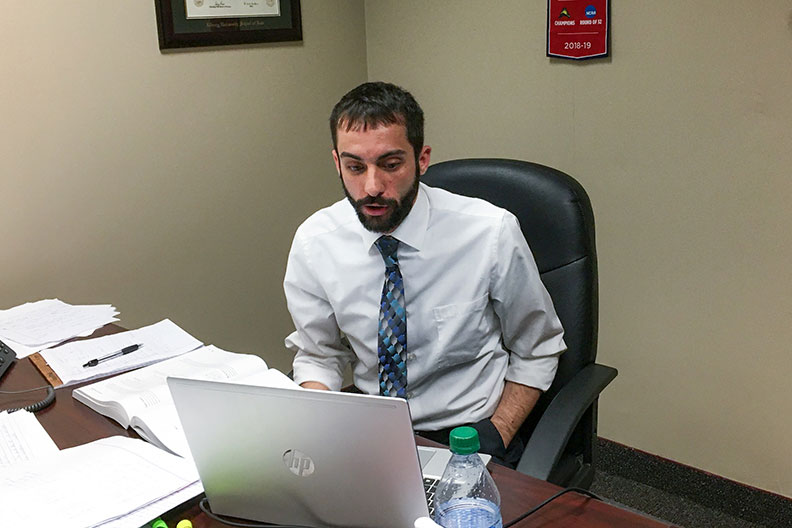 COVID-19 restrictions did not prevent the Liberty University Moot Court Team from conducting a four-day virtual tryout for 13 prospective students interested in joining next semester’s team.

“It was a little bit nerve-racking, because you never know exactly what technology is going to do,” said Rathsam, a licensed attorney in Virginia. “But everything went well, and we were able to get members of the current Moot Court Team to be judges from wherever they were around the country. It was a success for sure.”

Liberty Moot Court, offered by the Helms School of Government, provides opportunities for undergraduate students to develop their writing and oral skills in a court setting. Liberty’s team has garnered tremendous success at regional, national, and even international tournaments in recent years. In 2018, two Liberty seniors snatched the Prince Evidence Moot Court Competition and another team won the Notre Dame National Appellate Advocacy Tournament for Religious Freedom, also claiming Best Oralists and Best Brief. That success carried over into 2019, when a Liberty team reached the top four out of 48 teams in the Nelson Mandela World Human Rights Moot Court Competition in Geneva, Switzerland.

For the tryouts, each argument examined a problem involving the Sixth Amendment, which guarantees the rights of criminal defendants: right to a lawyer, right to an impartial jury, and right to know who is accusing them.

Contestants argued whether or not a state could have a law preventing children under 10 years old from testifying in a court hearing and whether or not that violated the criminal defendant’s constitutional right to cross examine a complaining witness who was under 10 years old. One contestant argued on behalf of the defendant, and another contestant argued on behalf of the state. All participants used the same facts and case laws to develop their arguments.

“What stood out to me was the resilience of the competitors to be able to not just put together really good arguments across the board, but also to be able to do it under these conditions where, all of a sudden, they are forced to pack up and move home,” Rathsam said. “But I was most surprised about the level of argumentation the students brought.”

In past years, tryouts took place at the Liberty University School of Law facilities in Green Hall, a much more formal setting than Microsoft Teams.

“I was a little bit concerned about people talking over each other and not hearing or understanding what people were saying,” Rathsam said. “But they all managed to figure it out, and they all worked through it.”

“It was a very unique experience judging in an online format,” said Davis, who hopes to pursue law school following graduation. “I thought the competitors did an excellent job preparing for the tryout.”

The tryouts stretched from April 7-10. Despite being called “tryouts,” the sessions were more for the students’ benefit, to learn if they have the skills needed to compete. Rathsam said all contenders showing genuine interest will have a shot at competing at a regional tournament.

“I think Moot Court is a great help to students if they want to go to law school to gain practical legal skills and expertise in an undergrad setting,” Davis said.

For those interested in participating on the Moot Court or Mock Trial teams, contact Rathsam at brathsam@liberty.edu.