A national think tank was launched on Nov. 30 by Liberty University that is dedicated to renewing and defending America’s God-given freedoms and restoring Judeo-Christian principles in national policies, institutions, and culture. 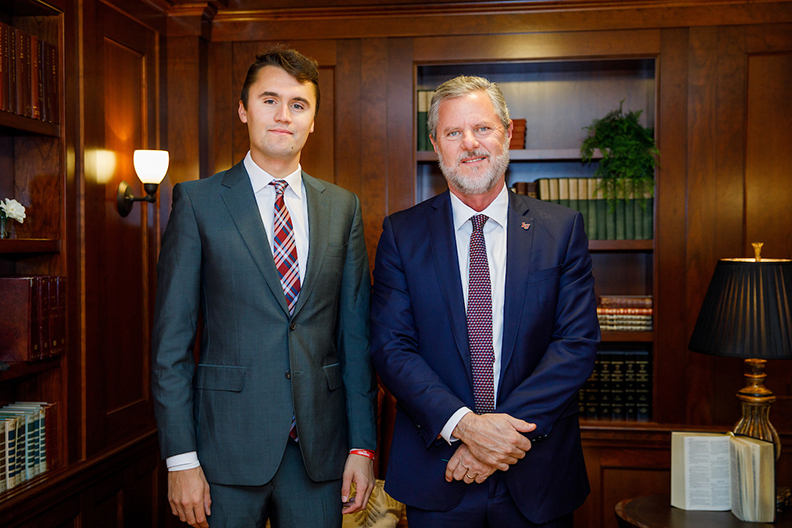 The Falkirk Center for Faith and Liberty, founded by Liberty President Jerry Falwell Jr. and Turning Point USA founder Charlie Kirk, will operate as a wholly owned subsidiary of Liberty University under its 501(c)(3) charter. The mission of the center will be to "equip courageous champions to proclaim the truth of Jesus Christ, to advance His kingdom, and renew American ideals." The launch took place in Lynchburg, Va., at a meeting of over 60 Christian leaders and influencers from across the country.

The need for the Falkirk Center has grown as powerful voices and institutions are increasingly seeking to eliminate Judeo-Christian principles from American culture and society. The news media, elected officials, academic institutions, and special interest groups have used their platforms to deny America's legacy of foundational Judeo-Christian principles and replace them with the creeds of secularism, influencing upcoming generations of Americans at alarming rates.

To restore Christian principles and American ideals, the Falkirk Center will use a diverse variety of advocates and media strategies to promote the core beliefs of America's Founders in limited government, free enterprise, individual rights and liberties endowed by our Creator, and their deliberate and intentional creation of a republic and not a theocracy. The center will operate forthrightly to engage believers and non-believers alike in pursuit of renewing Christian principles across all sectors of society in the formation of public policies and in our cultural and government institutions. As the center recruits new champions for the greatest governmental experiment in the history of humankind – the United States of America, it will build an army of advocates nationwide to join the cause and spread its messages about faith and liberty in all public forums and across all media platforms.

Commenting on the Falkirk Center launch, co-founder Jerry Falwell Jr. said, "As attacks on traditional Judeo-Christian beliefs grow in frequency and intensity, the need has never been greater for a national revival of our foundational principles throughout our society and institutions in America. We are delighted that Liberty University can play a part in this mission for Christ and American ideals."

Reinforcing that sentiment, co-founder Charlie Kirk added, "It's time we went on offense to stand up for the Church in America and to actively promote American freedoms based on the values enshrined in the U.S. Constitution. It's an honor to partner with President Jerry Falwell and Liberty University on this purpose-driven mission that will be used to organize an army of believers in faith and liberty, from renowned pastors to young influencers, to renew our sacred freedoms and defend our deeply held convictions."