Liberty University alumna Natalie Harp has been an outspoken supporter of the Right to Try Act, signed into law by President Donald Trump in May 2018. On Wednesday, she had the opportunity to thank the president personally for giving her lifesaving hope in her battle with cancer. 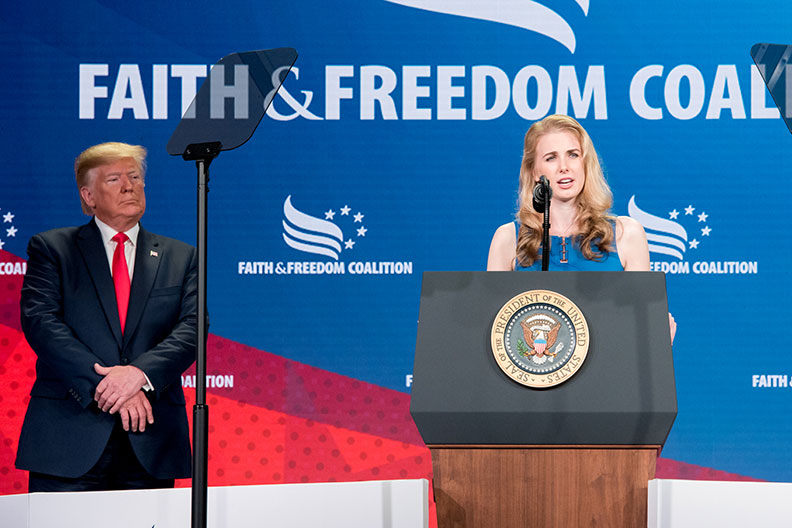 Harp, a Californian who earned her MBA from Liberty in 2015, first caught national attention and the eye of the president last week when she appeared on Fox & Friends to share her journey as a beneficiary of Right to Try.

“She lit up the television screen,” Trump said when he introduced her at Wednesday’s event.

Harp began her brief address with a biblical reference: “We all know the story about the Good Samaritan, but what you don’t know is that I was that forgotten person on the side of the road, the victim of medical error — the No. 3 cause of death under the previous administration — and left to die of cancer.”

Harp said that first “the medical establishment” came by her. 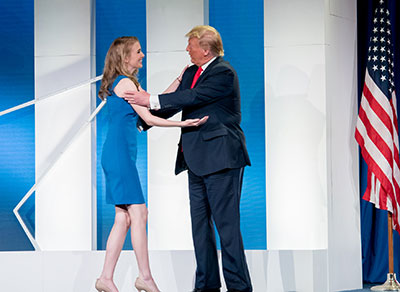 “They wrote me prescriptions for opioids, and they walked on. Next, the political establishment, they saw me there, and they stopped just long enough to come over and tell me how to die, how to speed up my death so I could somehow die with dignity. But then an outsider, my Good Samaritan, President Donald J. Trump, he saw me there and he didn’t walk by; he stopped.”

For everyone, Harp said, “He gave up his quality of life so we could live and work and fight with dignity — because he believes in survival of the fighters, not the fittest.”

She thanked Trump directly: “Mr. President, I have to say you have made a lot of promises to us, and you have kept every one of them. So now we are going to make you this promise: Just like you fought for us, forgotten America will never forget how you saw us on the side of the road and how you walked over and you picked us up and you made us great again. And now we are going to fight for you, Mr. President. God bless you.”

Trump said it was because of Right to Try that many people “have a medicine that wouldn’t have been approved for years.”

“Now, it’s looking a lot better, Natalie, I have to tell you,” he said. “I don’t know what it was, but that sucker worked.”

Harp’s story began in 2015, when a nurse accidentally injected her with sterile water, and she was soon so ill that she was housebound. Harp suffered through two failed chemotherapies and was denied clinical trials. Her healthcare providers coached her on how to die with dignity, prescribing medical marijuana and offering her Do-Not-Resuscitate orders and instruction on voluntary stopping of eating and drinking (VSED). Then she learned about Right to Try, which allowed her to try experimental drugs to fight her cancer.

Harp said that while her doctors could not offer her any options, the new legislation could.

“We now have a president who is broadening the pro-life movement to encompass life at conception to natural death,” Harp said in an interview on Friday. “Right to Try empowers the terminally ill to fight with dignity for life-saving experimental treatments and potential cures rather than be forced into pain clinics and ‘Death With Dignity.’”

In an opinion piece on LinkedIn, Harp explained her position on Right to Try and criticized presidential candidate Joe Biden for his promise to cure cancer only if elected. She said that since using the experimental drug, her numbers, and pain level, are stabilizing.

Harp speaks fondly of her Liberty experience, noting that her classes challenged her worldview and helped her develop as a Christ-centered woman in the workplace.

“What I especially appreciate about Liberty’s vision is that every field of knowledge is treated as a mission field — whether in education, business, or politics. Doing God’s work is not limited to ministry in churches or foreign countries but deep in the heart of our own neighborhoods — and yes, even the D.C. Swamp,” she said.

Harp said she appreciates that Liberty encourages students to be politically active because so many Christians end up abstaining from the world as they try to set themselves apart from it.

“Jerry Falwell’s leadership and unwavering support of our president is inspiring to witness as he exemplifies to people of faith that belief in the afterlife propels action during this life,” Harp said.

During the Faith & Freedom Coalition event, President Trump also made another Liberty connection when he recognized a team of students who had just returned from Tulsa, Okla., where they spent a week serving with LU Send NOW, Liberty’s disaster relief initiative, and Samaritan’s Purse to aid residents after historic flooding in May left areas severely damaged.