Knocked down, not out: Graduate overcomes brain injury to earn degree

During her first semester of graduate school (Fall 2016) at Liberty University, Caitlin Campbell suffered a traumatic blow to the head after a fall on the ice. The native of Ontario, Canada, had been serving as an assistant coach with the Lady Flames Division II hockey team while beginning work on her Master of Divinity in the Rawlings School of Divinity.

Though she was treated immediately, the extent of the brain damage was not immediately discovered. Campbell continued on with her studies, waiting for answers while struggling through life.

“When I first went to the hospital, they couldn’t find (a diagnosis),” Campbell said. “So, I kind of just battled through it for the rest of the semester.”

But Campbell’s struggles were severe. She found herself constantly missing class, sleeping 12-15 hours a day, and suffering from headaches, dizziness, and pain. Campbell felt nauseous every time she ate and her friends and professors told her that she did not look healthy. At the end of the semester, Campbell missed finals due to her symptoms.

“It was no electronics, not really leaving the house for a long, long period of time; I couldn’t really hang out with friends or anything like that,” she recalled. “It’s a really weird experience to have your brain fight against you. That was the toughest experience. I had a lot of emotional breakdowns.”

Instead of sinking deeper into the struggle, Campbell used the time to grow in her faith.

“It was a lot of time to focus on myself and my relationship with Christ, which was really cool because I got so much stronger in that season,” Campbell said. “It was literally just me and Him. The way I experienced His grace firsthand was incredible.”

Campbell found encouragement from some of the physicians during her treatment, but others told her that she would never be able to finish seminary. In fact, her parents were told by doctors that Campbell would have to live under constant home care.

“I firmly believed that God had a bigger plan for this, so I just kept crushing milestones,” Campbell said. “I was like, ‘No, I’m not going to listen to (criticism); I’m just going to keep pushing it.’” 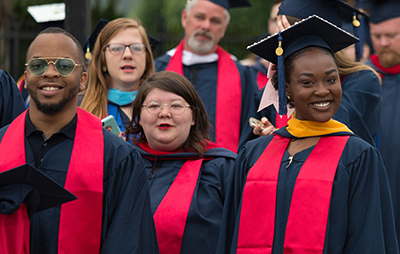 By Fall 2017, Campbell was back in Lynchburg and taking classes. She only missed the ends of two semesters. Campbell paced herself at first but worked hard to catch up and graduate on time this month.

“I’m doing fantastic now. I started working out again in Fall 2018. I started to learn to box and pick up new hobbies since I can’t be on the ice and play hockey anymore,” she said.

It was important to Campbell to complete what she started at Liberty because the university meant so much to her. The people she me there gave her the strength and encouragement to make it across the finish line and receive her diploma at Commencement.

“I just love this school and the culture here. I fell in love with it when I came here,” Campbell said. “The people, the professors, and the education … are incredible. I really valued the experience here.”