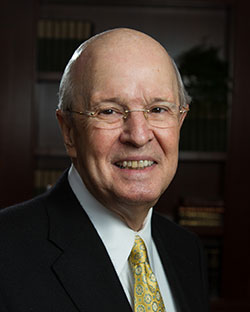 Liberty University is honored to welcome Pastor Jerry Vines, former president of the Southern Baptist Convention, founder of Jerry Vines Ministries, and longtime Board of Trustees member, as the keynote speaker for its 46th Baccalaureate Service on May 10, 2019.

He has been a Baptist pastor and preacher for more than 60 years.

“As I have done several times in the past, I am honored to be the Baccalaureate speaker for Liberty University this year,” Vines said. “Over these years, I have been thrilled to see God’s marvelous blessings on the university. I pray the Lord will give me the message to encourage the graduates to move forward in their lives as they continue to be Champions for Christ.”

President Jerry Falwell expressed his excitement that Vines will play such an important role.

“I am pleased and honored that Liberty University graduates in the Class of 2019 and their families will hear from Dr. Jerry Vines as the keynote speaker at Liberty’s Baccalaureate service. Dr. Vines is a former president of the Southern Baptist Convention (two terms) and a longtime pastor of one of the nation’s leading churches, First Baptist Church of Jacksonville. Dr. Vines has served as a member of the Board of Trustees of Liberty University since 1988 and was selected by Liberty’s founder, Dr. Jerry Falwell, to preach his funeral in 2007.”

As the Southern Baptist denomination strayed from its conservative theology in the 1980s, Vines was among the leaders who stepped up to guide the denomination back to its roots. It was through that process that Vines became best friends with Liberty Founder Dr. Jerry Falwell.

Baccalaureate is held each year to serve as a demonstration of Liberty’s Christian commitment to the Great Commission and Great Commandment. It will begin at 6 p.m. in the Vines Center. Doors will open at 4:30 p.m.