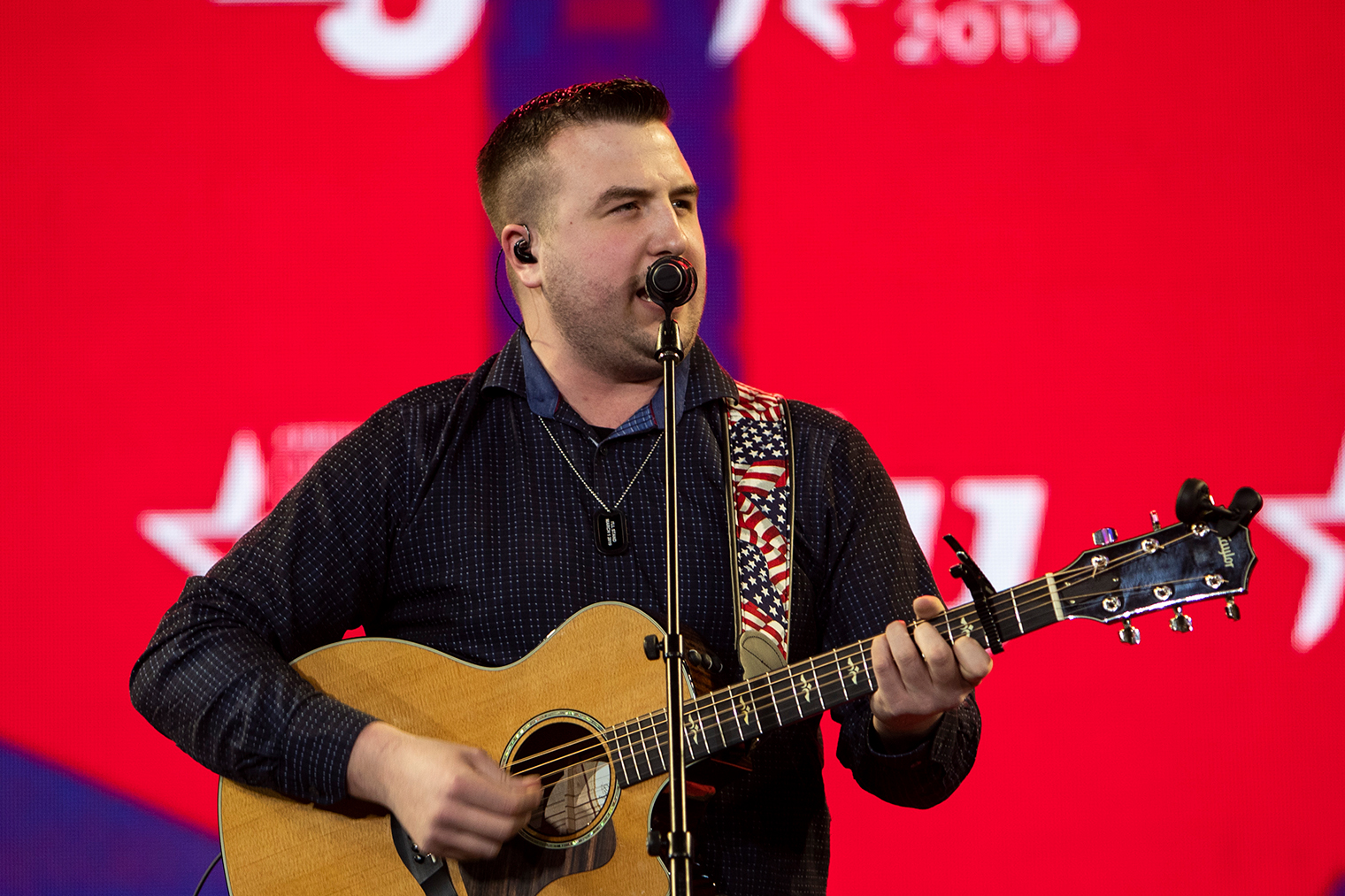 “It was an opportunity I have dreamed about for a long time,” said LU alumnus and songwriter Zach Radcliff, who debuted his new single, “I’ll Stand,” during a portion of the Conservative Political Action Conference (CPAC) broadcast from the Vines Center. “To be able to stand up at my alma mater with the people that I love and the people who crafted my musicianship and songwriting — it is a surreal feeling. It’s unbelievable. Only God could have brought this about.”

“I’ll Stand,” a patriotic anthem, was released Friday morning by Liberty Music Group and is available on Spotify and iTunes.

Across the Vines Center, audience members sang along to the powerful chorus: “I still stand for the flag when I see Old Glory flying, I still fall apart at every moment of silence, for the moms and dads, the sons and daughters, the brave who aren’t coming home. For their honor and for this land, I’ll stand.”

Liberty President Jerry Falwell told the crowd that he is proud of Radcliff’s work: “I believe this song will become to this generation what Lee Greenwood’s ‘God Bless the USA’ was during the Reagan years.”

Radcliff said that even though he’s written songs in as little as 20 minutes, “I’ll Stand” was a four-year process, involving help from some of his mentors. He wanted to write the song to honor military veterans and service members, to give them a voice.

Later in the afternoon on Friday, Radcliff performed “God Bless the USA” and gave an encore of “I’ll Stand.”

Radcliff majored in worship studies with a songwriting specialization while at Liberty from 2013-17. After college, he began serving as the worship director at Oakwood Church in Saline, Mich. Radcliff also works as a studio songwriter, producer, and sound engineer at Pearl Sound Studios, where several nationally known artists have recorded.

“Liberty’s music program is second to none,” Radcliff said. “I could never thank Liberty enough. It truly changed my life. I’m a better songwriter and a better human because of it.”

As a solo artist, Radcliff travels with his band to numerous events throughout the year. He describes his music as “contemporary Christian with a country twist.” His songs have played on both national Christian and country radio. Radcliff uses his songwriting to show how God uses broken people — in spite of their pain and failures — and restores them to new life.

“I remember when I was 11 years old and my teacher asked everyone what they wanted to do when they grew up and I said, ‘I want to inspire people with music,’” Radcliff said. “I’ve never lost sight of that.”