In a world oftentimes filled with darkness, actor, producer, and television host Dean Cain encouraged students at Liberty University Convocation on Friday to live out their ideals to brighten their environments.

Cain is well-known for playing the title hero in ABC’s “Lois & Clark: The New Adventures of Superman,” which aired from 1993-97.

“Superman is simple. He’s truth, justice, and the American way, and that’s the way I try to live my life,” Cain said. “Superman is kind of that ideal — if we were all that powerful, who would you be?”

Though he grew up in Hollywood, Cain said that many of his values, like Superman’s, are more reflective of “small-town America.”

“I certainly march by a different drum than a lot of folks in Hollywood, and I’m open about it,” he said. “I’m happy to have a conversation with anybody on anything, whether we agree or not. I think that is one of the things that is missing so much in today’s political climate.”

He encouraged students to use their time in college to test and sharpen their worldviews.

“Even at colleges and universities, you should be able to hear opinions that you don’t agree with,” Cain said. “And you should be strong enough in your opinion to know that you are right and to be able to have that conversation.”

Though Cain has performed in more than 150 movies, he said the most important work of his career was his recent film, “Gosnell: The Trial of America’s Biggest Serial Killer,” which dramatizes the arrest and trial of abortion provider Dr. Kermit Gosnell, who was convicted of three counts of murder, 21 felonies, and 211 misdemeanors after performing illegal abortions.

“These are children that could have been sitting here today,” Cain said. Cain plays a police detective who arrested Gosnell.

From the stage, Cain, Liberty University President Jerry Falwell, and Liberty Senior Vice President for Spiritual Development David Nasser discussed the importance of standing for what Nasser described as “whole life issues,” including caring for mothers with unexpected pregnancies.

“Gosnell” was met with resistance during its early production due to the subject matter, but Cain said it performed well during its limited theatrical release and has exploded since its release on DVD and on-demand.

Freshman Dee Romero, who enjoys watching Cain in The CW’s “Supergirl,” said she appreciates how he “uses his platform to advocate for issues like abortion.”

She liked how Cain shared the ways he listens in order to grow in his understanding of issues.

“We are taught to challenge our perspectives, to take everyone’s opinions into consideration; I feel it gives us a more open mind,” she said. 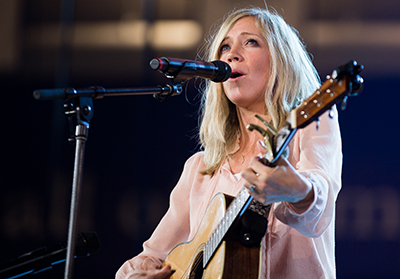 Singer-songwriter Ellie Holcomb kicked off Convocation performing “Fighting Words,” Wonderfully Made,” and “Red Sea Road.” She also encouraged students to lean on God’s power when they face the storms of life.

“There are so many lies that we believe,” Holcomb said. “We desperately need to hold on to what is true. … God calls His Word the sword, and we are going to use it.”

Holcomb and her husband, Drew, will perform on campus Friday night at the Center for Music and the Worship Arts, Concert Hall.