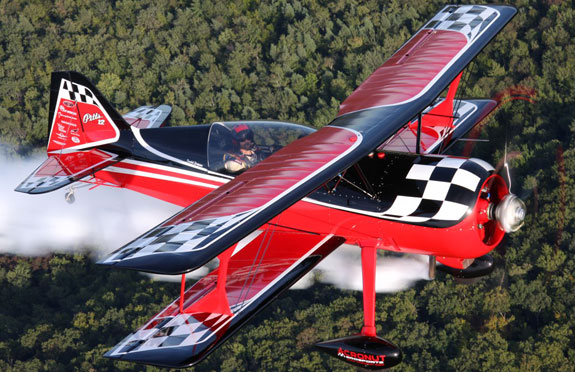 At the Lynchburg Regional Airshow this weekend, Liberty University alumnus Kendal Simpson will have one of the best seats in the house.

Simpson, who graduated in 1997 with a Bachelor of Science in Business Management and a minor in Aviation, will fly his Pitts Model 12 biplane in the show, scheduled for May 21-22 at Lynchburg Regional Airport.

Simpson said he hasn’t been to his alma mater for 10 years and is excited to return. 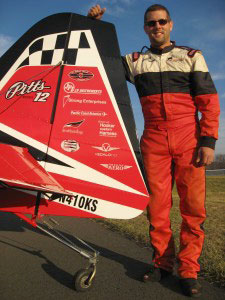 “It’s like a homecoming airshow for me,” he said. “I love being in any airshow and obviously this one is special, being a Liberty alumni and the Lynchburg airport being the first airport where I first soloed and I got my private pilot’s license … it’s going to bring back a lot of good memories.”

Simpson, who lives in New Jersey, has been performing in airshows for three seasons, but has been competing in aerobatics competitions for 11 years, winning more than 35 medals and trophies.

He said guests should be prepared for a “high-energy” performance.

“You’ll probably be seeing the airplane do things most people don’t think an airplane should be able to do,” he said, including “a lot of tumbling, a lot of smoke and lots of noise.”

Simpson is in the lineup with the U.S. Navy’s Blue Angels, whose thunderous sounds surrounded campus this week as they ran practice flights. They will be performing as part of the Centennial of Naval Aviation in 35 locations throughout the U.S. this year. The Blue Angels were last in Lynchburg in 1982.

The airshow will also feature the U.S. Army’s Special Operations team, The Black Daggers from Fort Bragg, N.C., and The Flying Circus Airshow from Bealeton, Va., along with a vintage car show, educational displays, children’s activities and concessions.

Simpson said he has done a few shows with the Blue Angels and is looking forward to another chance to join them.

“Growing up I always loved going to airshows and watching the Blues as well as a bunch of other performers that I always looked up to, and now to be flying in the same shows as them and walking side by side with them all it’s really neat,” he said.

Simpson has accumulated more than 6,800 hours in more than 60 different types of aircraft. He has a wide range of aviation experience, including flying freight, charter flights, flight instruction, crop dusting, glider towing, corporate, and airline flying. He currently flies some of the most advanced corporate jets in the world both domestically and internationally, while performing in airshows on the side.

Simpson said he is looking forward to seeing how Liberty’s aeronautics program has grown, from offering only a minor in aviation when he was there to a full-scale, accredited program with more than 300 students and a variety of majors.

About 30 Liberty University School of Aeronautics students have been preparing for this weekend’s show, including helping to lay out the mile-long tarp for the Blue Angels.

James Mashburn, chief flight instructor at Liberty, said this is a great experience for the students.

About 60 students will also be volunteering with food vendors during the show.