Fox & Friends weekend host Pete Hegseth, a U.S. Army veteran, was the keynote speaker at Friday’s Liberty University Convocation, which centered around the idea of understanding what it takes to secure and maintain freedom.

Convocation began with Christian singer/songwriter Charles Billingsley joining the Liberty Worship Collective in leading the arena in worship. Billingsley resides in California but is a familiar face on campus — he was the worship leader at Thomas Road Baptist Church in Lynchburg for many years and continues to mentor students in Liberty’s worship program. Billingsley introduced students to a new song he wrote, “Center of It All,” reminding them where they can find security no matter where they are in life.

Then, the New York Times best-selling author duo of Corey R. Lewandowski and David Bossie spent a few minutes discussing their latest book, “Trump’s Enemies: How the Deep State Is Undermining the Presidency.” The pair, former leaders of President Donald Trump’s presidential campaign, also spoke at Convocation about a year ago. 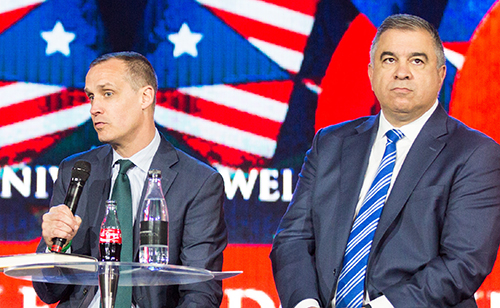 The authors described their face-to-face interactions with President Trump and what the commander in chief faces each day as he seeks to protect and strengthen the United States. Their book is the only one to feature an interview with the president since he took office two years ago, and they described it as a “peek behind the curtain” of the current administration.

Explaining the title, Bossie said that he wants to take people behind the scenes of the current administration to see what type of resistance they experience every day.

“We just want the American people to be educated so they understand what the narrative of the left is … to see exactly what he (Trump) is up against,” he said. “He gets up every day, and he tries to do the best he can for the American people.”

“What Dave and I try and do in this book,” Lewandowski added, “is to tell people the truth about what is going on.” 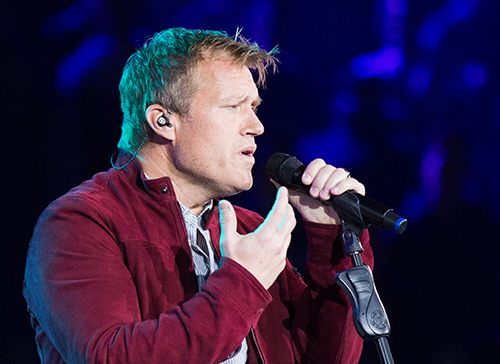 Lewandowski described his opportunities to sit in the Oval Office and to ride in “the beast,” (the president’s limousine), Air Force One, and Marine One. “It’s a pretty amazing experience for a kid who grew up in Lowell, Mass., to have the privilege of being there next to the leader of the free world.”

Hegseth, who served in Iraq as a platoon leader, then took the stage saying he felt “at home” at Liberty during his first visit to campus.

“To see a room filled with so many people who believe in something bigger than themselves, from this generation, is something to see,” he said, noting he grew up in church. “God bless you guys, Liberty University, and everything you guys do here.”

He explained the importance of not growing complacent as free men and women.

“History is not over; you do not live in a special moment,” he said, pointing out the fall of empires past like the Greeks and Romans. “History does not hit pause.”

He added that “America is not inevitable” and that each generation must fight to preserve her greatness.

“This institution and others like it ... the schools that put values first are going to be what keeps our country great and passes it on to the next generation.”

Hegseth warned that if America does not remain a global leader, then freedom is not going to survive. “Freedom will literally be in retreat,” he explained. “There is nowhere else to go.” 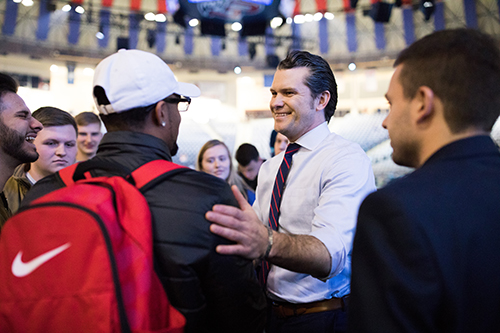 In closing, he charged the crowd to be bold in standing up for their beliefs and values so that those principles do not fade away over time. But it won’t be an easy fight, Hegseth warned.

“Because I was given the foundation of faith and of patriotism, love of country, working hard, individual responsibility, believing in something greater than yourself, (and believing) that my rights are given to me by God, not by a government, I can handle what comes next,” he said. “The foundation that you are getting here at Liberty will prepare you for the rest of your life. Just do me one favor — never back down.”