While speaking out against political correctness and encouraging the next generation of students to stand up for truth, Candace Owens struck a chord with the Liberty University crowd gathered in the Vines Center for Wednesday’s Convocation.

Owens, the director of communications for the conservative advocacy group Turning Point USA, has served as guest host on Fox News, MSNBC, and CNN and has more than half a million Twitter followers.

“She is one of the young people that is really making a difference in our country,” Liberty President Jerry Falwell said in introducing her. “Us old guys might have age and wisdom, but you guys listen to the young ones more than you listen to us. She is making a difference with the new generation in ways that us old folks cannot.”

Owens explained how she has risen above poverty and abuse, which led to an eating disorder and drinking problem, to return to her Christian roots — ingrained in her by her grandfather.

In high school, Owens was the target of racial threats from four classmates that led to an FBI investigation. Labeled a victim, she battled with anorexia over the next four and a half years as she processed the event, which involved media attention and attacks on her integrity. In early 2017, she decided to take control of her life. She stopped drinking and blaming God for her problems stemming from the verbal attacks, and found her voice through social media. 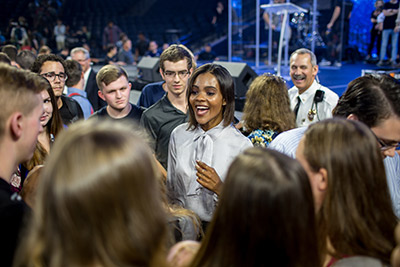 “I wasn’t happy being a victim. I was miserable,” Owens said. “I have this idea that if we don’t accept ourselves as oppressed, or as a victim of our experiences, then we can achieve more in life.”

Her YouTube videos take on controversial issues, like the #MeToo Movement, welfare, and Planned Parenthood, and her positions defy stereotypes.

“I go for the jugular a lot against tons of things,” she said. “I challenge Americans to believe their experiences versus what they see coming out of their TV screens. Because … I grew up in a country that is diverse. I grew in a country that has given opportunities to so many people, including myself.”

Though her positions have garnered critics, Owens said she just wants to give people a message of self-empowerment.

“I go around with a very simple message which is that bad things happen to everyone, but a victim’s mentality is not something that you should possess.”

Her views have also received praise, including from hip-hop megastar Kanye West, who tweeted, “I like the way Candace Owens thinks,” in response to her video posted after the events in Charlottesville.

Owens said that people like her, West, and President Donald Trump have a shared belief in individualism. She suggested it is that conviction that draws critics, because so many people want to control how people think and believe.

“It’s believing in yourself, it’s standing up in the face of everybody telling you ‘You can’t. You’re not allowed to think that.’”

She said she works every day to share her passion and energy and message of faith, hope, and love with the world.

“It’s standing up in the face of all of that (criticism) and saying, ‘No. I am my own person. I am governed by what I believe to be truth, and I can live up to any expectation that I set for myself,” Owens said.

On Friday, Liberty will welcome another media personality to Convocation, Judge Jeanine Pirro.

At the start of Wednesday’s service, Jordan Hayley, president of Liberty’s chapter of the Alexander Hamilton Society, introduced Dr. Michael Rubin, a resident scholar at the American Enterprise Institute in Washington, D.C., who has spent his career fighting terrorism.

Rubin, who lived among the Taliban in Iran prior to the 9/11 terrorist attacks on America and has an arrest warrant from the government of Turkey after speaking out against the arrest of Pastor Andrew Brunson, emphasized the importance of standing up for religious freedom.