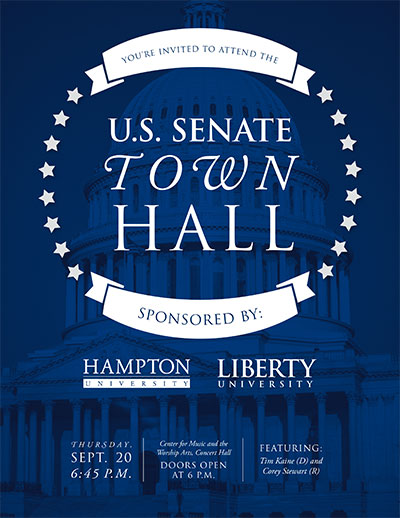 The first Town Hall will be held at Liberty University’s Center for Music and the Worship Arts on Thursday, Sept. 20, from 7-8 p.m., and the second Town Hall will be held at Hampton University’s Convocation Center on Wednesday, Oct. 3, from 7-8 p.m. Through a partnership with the Virginia Association of Broadcasters, each event will be produced for television and broadcast live across the Commonwealth of Virginia. It will also be live-streamed on Liberty’s Facebook page and on Hampton's website.

The Town Hall format will include questions from both the moderators and students at each university. The first Town Hall will focus generally on domestic and economic policy, and the second Town Hall will center on international and military policy.

“We are very excited to host these two important Town Halls with Hampton University and the Virginia Association of Broadcasters,” said Robert Hurt, a former U.S. Representative and director of Liberty’s Center for Law & Government. “We are grateful to both candidates for participating in these two events, and we hope that our students and the public will benefit from what promises to be a lively and informative exchange of ideas at a critical time in the history of our nation.”

Kelly Harvey-Viney, director for Hampton University’s Center for Public Policy, said: “The partnership between Hampton and Liberty is an example of institutional civic engagement at its best! As our schools have connected across regional and ideological lines, so should our elected representatives in order to carry out what is in the best interest of the Commonwealth of Virginia. We need to have an honest conversation. Our children’s future depends on it, and these Town Halls are critical in allowing that to happen.”

“We hope our collaborative partnership with Liberty University showcases what wonderful things can be achieved when institutions with different educational missions and leaders with open minds work together to promote broader civic objectives,” added Paul C. Harris, a former Virginia delegate and Hampton University’s senior vice president. “What binds Hampton and Liberty in this unlikely endeavor is our shared passion for the value that rigorous political debate plays in the proper function of an educated citizenry.”

Hampton University is located in one of the most populous regions in the Commonwealth and has an unparalleled history of leadership as one of the top historically black universities in the world. Liberty University is located in the heart of the Blue Ridge Mountains in Central Virginia and is one of the largest Christian universities in the world. The two schools’ shared commitment to Thomas Jefferson’s idea that only a well-educated citizenry can preserve the promise of the American republic led them to host these two Town Hall events during this important U.S. Senate election.

Each event is free, and the public is invited to attend. Doors will open at 6 p.m.; the audience must be seated no later than 6:45 p.m. The media are also invited to attend and should contact Liberty’s External Communications Office at (434) 582-7751 or Hampton’s University Relations Office at (757) 727-5253 to coordinate media access and coverage.