Liberty rises to No. 8 in nation 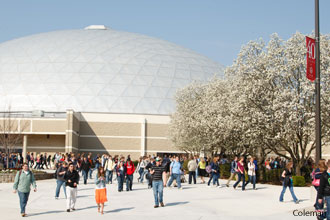 Liberty University is now the nation’s eighth-largest, four-year university, according to recently released data from the U.S. Department of Education.

The information was gleaned from 2010 data released by the National Center for Education Statistics.

In the center’s 2009 data, Liberty was the 25th-largest university.

According to the newest data, Liberty is the largest private four-year, non-profit university in the United States and the world’s largest Christian university.

“The vision for Liberty University when it was founded in 1971 was to become a world-class Christian university with NCAA Division 1 athletics, academic excellence and all the programs for students that are found at any major university,” said Liberty University President Jerry Falwell Jr.  “Brigham Young and Notre Dame were identified early on as universities that Liberty aspired to emulate for evangelical Christians.  It is thrilling and humbling to see Liberty University fulfilling the original vision in so many areas, including the goals for enrollment, so early in the school’s history.”

President Jerry Falwell Jr. said he would like to see Liberty’s resident enrollment grow to 20,000 in the next decade.