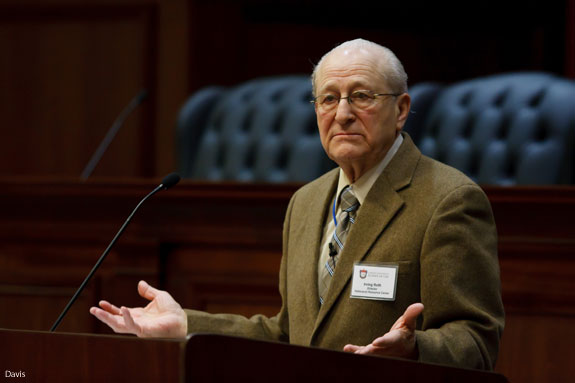 Holocaust survivor Irving Roth gave an eyewitness account of the holocaust Wednesday as the final speaker of a two-day symposium on genocide hosted by Liberty University School of Law and the American Association of Christian Counselors.

Roth, 82, is director of the Holocaust Resource Center in Manhasset, N.Y. He was born in Czechoslovakia. At the age of 14 he was loaded into a cattle car on a train, along with thousands of other Jews in his city. They were dispersed to concentration camps throughout Europe.

He recalled the tragedy in detail on Wednesday:

“Now I’m in a cattle car. The doors are locked. Ninety people, no place to sit, no toilet, no windows – on the third day, the train stops … then the doors are slid open. It’s night time. I jump off the train ... in the distance I see flames coming out of chimneys. At 14 years old I have no idea where am, I have no idea what’s happening. All I know is that I’m in someplace that’s not good. I’m frightened. …

“Within minutes I’m in a line facing a man in a uniform who looks at me and says, ‘To the left.’ My brother to the left, my grandfather and grandmother to the right, my aunt, and my 10-year-old cousin to the right … they are marched off to that building, the flame shoots (up). You might think panic would break out -- it didn’t. Why? They were told they were going to take a shower. …

“Smoke and ashes of the 3,000 people that arrived in the transport the night before, 24 hours later 300 of us are still alive. By this time we are in striped uniforms, shaved, standing in formation and in fact I stopped being Irving Roth. I’ve become a number.” 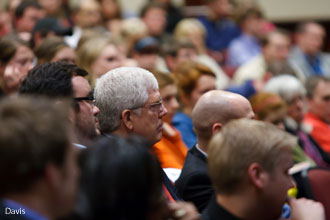 This was the first time the School of Law has hosted a symposium on genocide. Titled “Genocide and Religious Persecution around the World,” the event featured speakers from government agencies, nonprofit organizations and other experts on the subject from around the world, including Alphonsine Abia of the International Criminal Court in The Hague, The Netherlands and the Honorable Jean de Dieu Mucyo, Executive Secretary to the National Commission on the Fight Against Genocide.

“The symposium was unique because it didn’t have the usual experts who studied genocide from a distance, but rather we brought together experts from around the world who lived through genocide and who devote their lives to providing solutions and healing to those most affected,” said School of Law Dean Mat Staver.