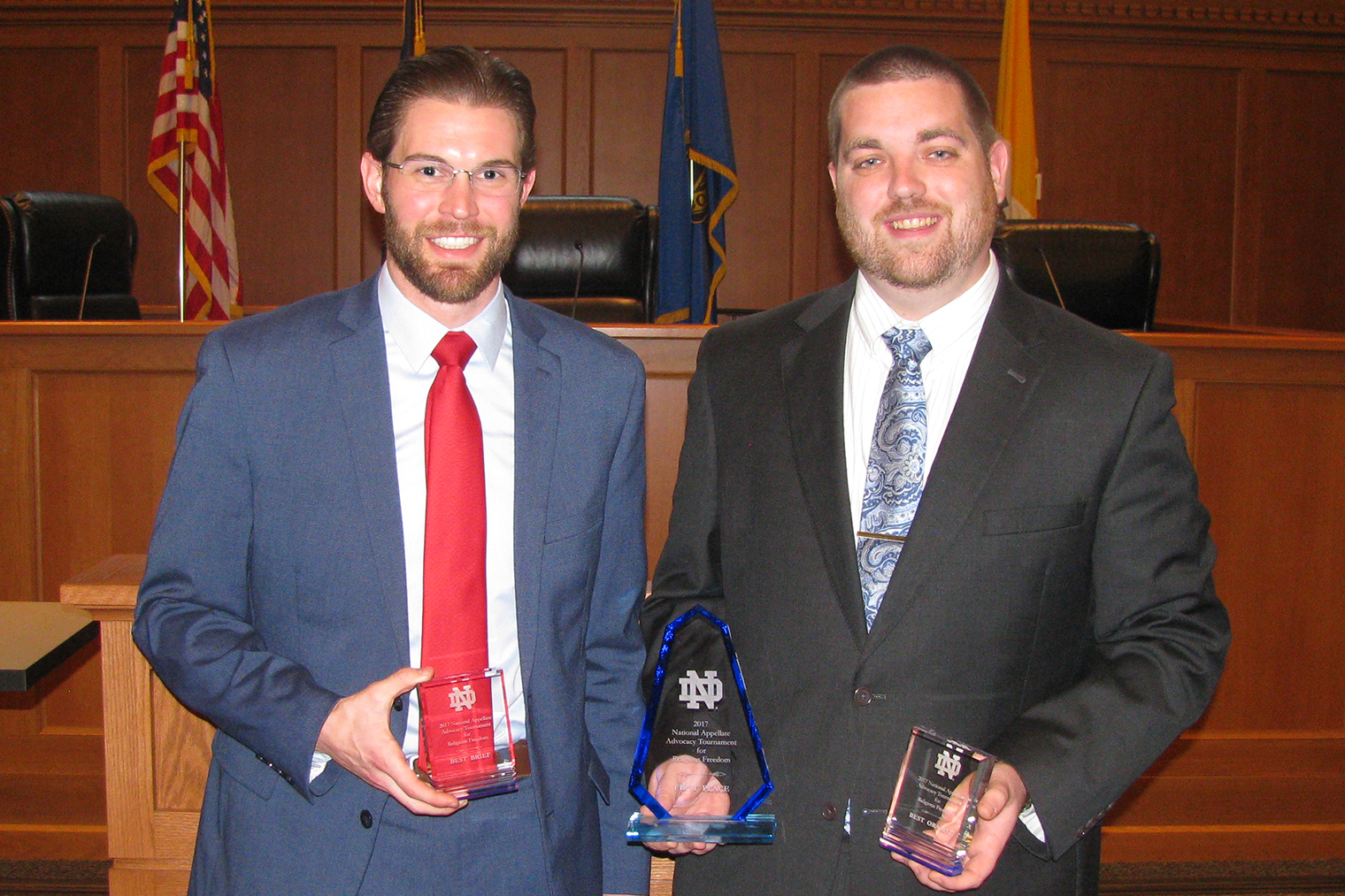 Liberty University School of Law Moot Court Team members claimed the championship title at the Notre Dame National Appellate Advocacy Tournament for Religious Freedom over the weekend. The duo of Levi Mauldin and Tom Morris ran the table at Notre Dame, defeating teams from Michigan State and Northwestern in preliminaries and then beating a George Washington squad in the semifinals. Liberty defeated the team from Michigan State again to win the tournament.

“Notre Dame’s Best Oralist is awarded to the team that has the highest composite oral argument score throughout the preliminary rounds, showing that both Mauldin and Morris argued at an extremely high level throughout the tournament,” said Professor of Law Scott Thompson, the faculty adviser to Liberty’s Moot Court Board.

According to Notre Dame School of Law, the tournament brings together competitors, scholars, and practitioners from across the country for a dialogue on the topic of religious freedom. This year’s problem involved the free exercise of religion by inmates in federal penitentiaries.

This is the first time that a Liberty team has won a tournament championship and claimed Best Brief and Best Oralist awards at the same tournament.

“We’re thrilled that our team swept the title as well as the Best Brief and Best Oralist honors at Notre Dame,” said Liberty Law Dean B. Keith Faulkner. “These students and their coaches worked very hard in preparing, and it is a blessing to enjoy their success. Our Moot Court program is outstanding, and is one of many reasons we have been recognized as a top 20 law school for practical training in the last year. Our graduates are ready to make an impact on day one of practice because of our Lawyering Skills Program and advocacy skills training opportunities they receive at Liberty Law.”

Liberty University School of Law has been competing in moot court since the school was founded in 2004 and has quickly become one of the top programs in the country. The team has twice qualified for the Andrews Kurth Moot Court National Championship, a tournament reserved for the top 16 ranked programs in the country. Liberty achieved its highest national ranking to date, No. 9, at the end of the 2015-16 academic year. Liberty also qualified to compete in the American Bar Association (ABA) National Appellate Advocacy Competition national finals eight times in an 11-year span, reaching the quarterfinals twice and the semifinals once (in 2015).

Teams earn points toward a national berth in the Kurth national championship as they compete at various moot court tournaments throughout the academic year, gaining more points as they advance through elimination rounds. For tournaments, students pair up and write a brief for a mock case that resembles (and, in some cases, is identical to) a Supreme Court case. They prepare oral arguments for both sides of an issue. Teams earn points for finishing first or second (or for making the semifinals of larger tournaments) and for winning Best Brief and Best Oralist awards.