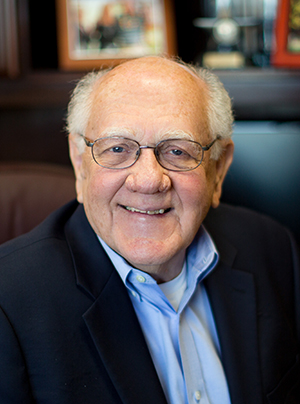 For 35 years, Tom Arnold has been sharing the story of Liberty University. He has traveled the country talking to people about the college’s mission to Train Champions for Christ, and he has gathered supporters along the way who would help ensure that this mission is carried out in future generations.

Next week, Arnold, 80, will retire from his latest post as Liberty’s vice president for development, where he has overseen a team of planned giving officers. Arnold spent most of his first 20 years with Liberty on the road as an ambassador-of-sorts for the school, visiting donors in their homes and helping to raise funds for a young school that would eventually become the largest Christian university in the world. He worked in 40 different states, traveling from Lynchburg every other week to greet those who were curious to learn about the growing college and to keep Liberty’s already faithful supporters up to date with its amazing and rapid progress.

Arnold came to Liberty in 1982 with a background in sales and insurance. In his earlier years, when the Rev. Jerry Falwell, Liberty’s founder, appeared on the television broadcast, “Old Time Gospel Hour,” people across the country were eager to learn more about the new university he spoke about and how they could become a part of impacting the world for Christ through these new college graduates. Arnold was their connection to this exciting and worthwhile partnership. He took the news of Liberty to thousands of interested individuals — from a soybean farmer to a real estate investor, from a retired teacher to an engineer. He spent time building relationships with them and helping them make important decisions for their future.

“I loved to go into a home and sit down and help people plan and show them how they can give more to the Lord’s work through good planning,” he said. “That’s exactly what we do. To me, it was a calling; it wasn’t a job. The Lord said, ‘That’s where I want you.’”

Over the years, Arnold showed Liberty’s donors example after example of graduates who have fulfilled the founder’s vision with their help. And he showed them how, with their support, the university has grown beyond anyone’s expectations.

“People give because of our product, which is our students — Champions for Christ going into the marketplace, in all walks of life. That was Dr. Falwell’s vision, and that’s what people see. People love what we stand for, and they still like the track that we’re on.”

Arnold remembers the donor who gave Liberty its first million-dollar charitable gift annuity. When the same donor later expressed that he wanted to give more to the school, but didn’t need the monthly income that a gift annuity provided, Arnold helped him establish a scholarship fund in memory of his late wife. Every year, when the scholarship funds were dispersed, Arnold would send the donor a list of the recipients. “He loved to see those students’ names; that was very special to him,” Arnold said.

Arnold trained a team of regional representatives to build the same kind of meaningful relationships with Liberty’s partners across the country. As the university continues to grow in national prominence, with world-class academics and athletics, and as it nears the end of a $1 billion campus transformation, Arnold has seen for himself how God has used these faithful contributors. 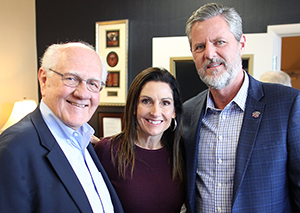 “It is totally a miracle only God can do,” he said.

Liberty President Jerry Falwell and his wife, Becki, attended a retirement party for Arnold on Friday. Falwell called Arnold “one of the secrets of Liberty’s success as an institution.”

“His competence, devotion, impeccable integrity and commitment to Liberty’s mission has been unwavering, and Liberty would not be where it is today without Tom Arnold and his team,” Falwell said. “Liberty has been blessed by God to have Tom Arnold’s service, and he will be greatly missed. Tom and I have become good friends over the years, and I will miss serving beside him as a colleague at Liberty University.”

Arnold said he, too, will miss working with friends who display the same fervor in advancing Liberty’s mission. But he said he is leaving Liberty knowing full well that the mission will endure.

“If we stay true to the Lord, and as long as His hand is on this school, I believe it will continue to do exactly what Dr. Falwell wanted to do — put God’s people in all different fields of work. And I believe we’ve seen that already, in just a small period of time, and that will mushroom soon. When you get this many graduates and put that many people out in the workplace, it’s going to make a difference.”