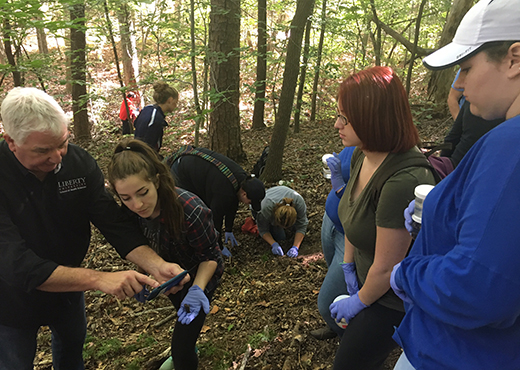 A group of Liberty University students gathered deep in the woods near the Hydaway Outdoor Recreation Center Saturday to uncover bones, collect insects, and dig around for other evidence as part of a simulated crime scene hosted by the Forensic Science Residential Program.

The students — led by Liberty Biology Professor Dr. J. Thomas McClintock — worked through the stench to collect and label a variety of insects in the woods to reveal information about a 45-pound pig that was placed in the forest weeks before.

The simulation is part of Liberty’s forensic entomology class, and the students were primarily concerned with learning how to use insects as evidence from a crime scene. McClintock said by identifying the insects and determining the age of larvae feeding off the body, students should be able to deduce when the pig carcass was initially placed in the woods.

“There are a couple of different concepts,” McClintock said. “But from a forensic entomologist standpoint, they are looking at when the body is available for insect colonization, and that will give you a good idea of the time of death or when the body was dumped.” 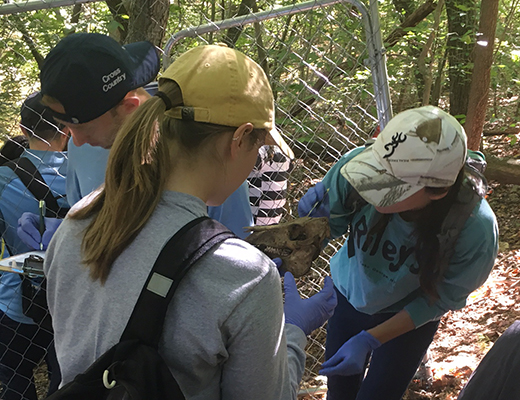 Students will also gain experience using the DNA they found from the collected insects for victim identification and use the pig remains to draw conclusions about the circumstances of the death. Because pigs share a lot of genetic similarities with humans, the experience will help prepare them to investigate a real-life crime scene.

“This all really ties into investigations,” said Kristin Jones, who serves as president of Liberty’s Forensic Science Club. “With forensic science, there are all sorts of things you can do. You can be on the field like this or be in the lab doing DNA analysis, so this is definitely a beginning step to all that.”

The simulation is just the start of a semester-long project. Over the course of the semester, students will analyze their findings from the simulated crime scene and present a formal report of the findings at the conclusion of their research.

The simulation encountered an unexpected challenge, however, as the carcass was never found in the woods. This came as a surprise to McClintock and the students, who believe a scavenger may have found the carcass and consumed or destroyed it. Students did find the pig’s skull, hair, and skin, as well as other bones and ligaments.

“It’s definitely more of a challenge for the students to find a lot of useful data,” McClintock said, “which is very typical at a crime scene.”

As students worked through the stench of the pig’s remains to locate insects and evidence, McClintock asked students questions while filing through evidence and encouraged them to be thorough as they combed the woods.

Junior forensic science student Emily Kolacz said the simulation allowed the class to go beyond what they learn in their textbooks and to apply that knowledge in real-life scenarios.

“It really takes it a step further than what we do in the classroom,” Kolacz said. “You can always see pictures of this sort of stuff, but this is all about getting your hands dirty and getting into the field of what we really want to do.”

Liberty students will have another opportunity to get experience in the field with a bioterrorism simulation that will take place at an undisclosed location on Nov. 4. The simulation, which took place last year at the LaHaye Ice Center and in 2015 in the Vines Center, will be in partnership with the U.S. Army National Guard, FBI, Virginia State Police, and the Lynchburg City Fire Department and will stage the actions of first responders in wake of a bioterrorist attack.