Hundreds of Liberty University international students waving the flags of their home nations and dressed in traditional garb walked down the steps of the Vines Center on Monday to the cheers of their fellow students, kicking off the biannual Global Focus Week when Liberty celebrates the cultures of the world and the work that is being done to impact them.

This year, a new level of intentionality was brought to the event as the university’s new global initiative, G5, launched in Convocation.

The project is based off of the attributes of Galatians 5 and focuses on a specific country each year. This year’s country is Rwanda, and students will be given opportunities to learn more about the nation through campuswide events focused on the culture and to take action through child sponsorship with Compassion International or trips through LU Send to Rwanda over spring break. 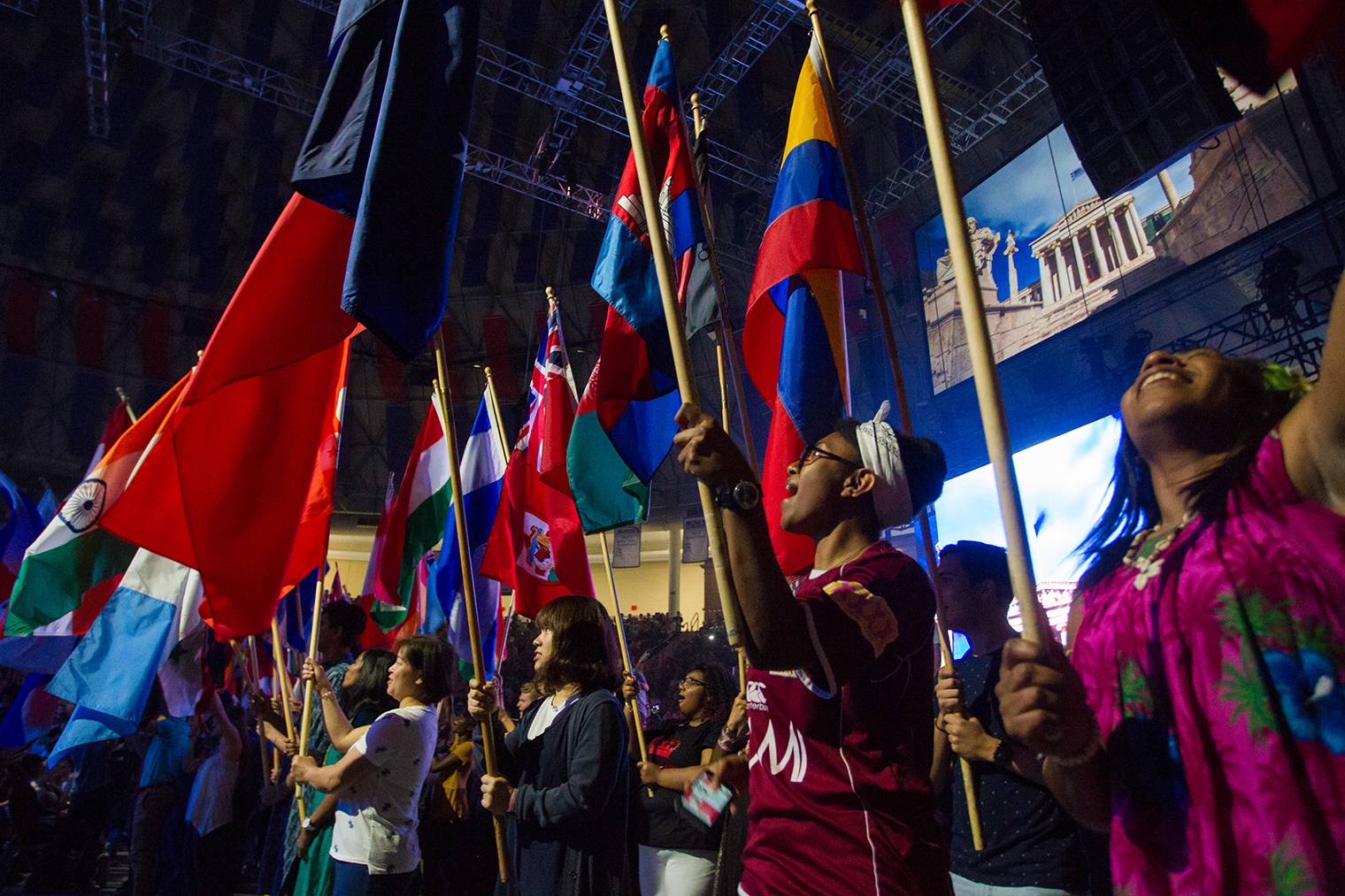 Senior Vice President for Spiritual Development David Nasser said the idea came from the desire to make an impact on a specific nation that would lead to radical change.

“It’s the idea that we would show the Fruit of the Spirit, the character of Christ, to people all around the world,” Nasser said, “but also to show how that looks like within five intersections of influence.”

These influences include government, economy, religion, entertainment, and education.

During a roundtable discussion, Nasser joined Vice President for Spiritual Development Josh Rutledge, Compassion International Director of Collegiate Partnerships Jared Brown, and Liberty students Hope Cross and Liberti Todd to talk about a recent trip to Rwanda. Compassion sent 11 people from Liberty to begin establishing connections in the country to make this initiative a reality.

Brown said he believes that through G5, Liberty students will be able to change the world.

“The average age in Rwanda is 19 years old,” Brown said. “They are reshaping their nation as college students, as young people, which is absolutely incredible.”

Between April and June of 1994, more than 1 million Rwandans were killed during one of the worst genocides in history. Liberty’s team visited a memorial dedicated to the victims.

A clip of Cross processing what she had learned about the horrors of the genocide after she had left the memorial was shown in Convocation. She called it “an unimaginable terror” that the people of Rwanda faced during such a dark time in the country’s history.

“One of the things about the memorial is that it didn’t leave anything out. Nothing was sugar coated,” Cross said. “Everything was raw and real right in front of you because they do not want that to happen ever again.” 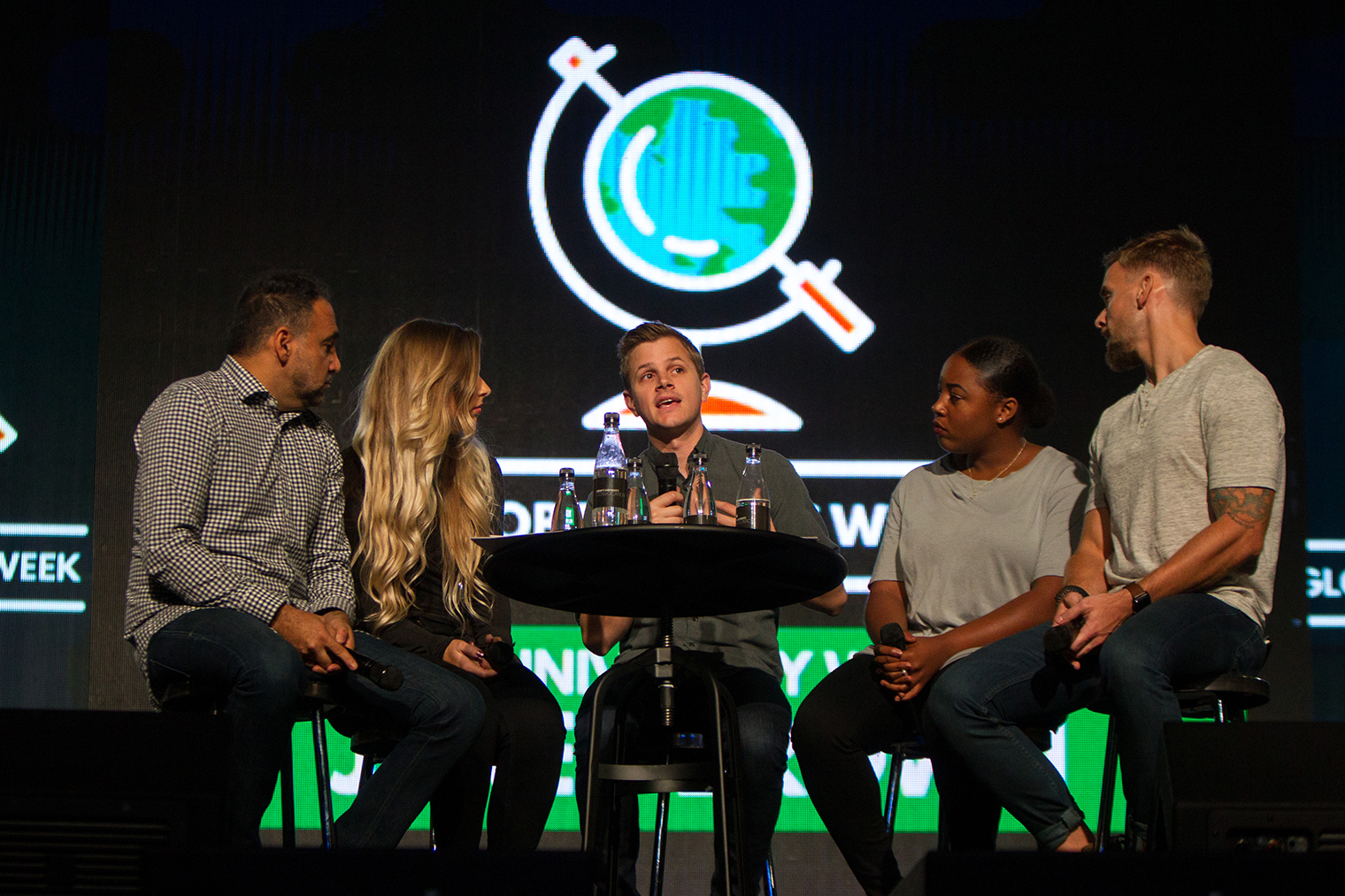 Since the genocide, the nation has drastically recovered. It is rated one of the safest countries in the world and considered the cleanest country in Africa.

“There is no greater picture in the world (today), against that kind of backdrop of horror, that shows how much Jesus has done in that country,” Rutledge said. “Look what happens when the power of forgiveness and reconciliation are on full display.”

As students take part in Global Focus Week events, they will continuously be reminded to make an impact through G5.

On Sunday night, the School of Music Concert Hall hosted the Stories and Songs Rwanda event, which featured stories and songs prominent in Rwanda culture.

Monday night will include a Cultural Exposure Rwanda event where students will be able to taste native Rwandan food and see traditional dance as a glimpse into the culture of the African country. Afterward, Rwandan Liberty students will share how they are shaping culture through their passions. A guest from Rwanda will also tell the story of how he uses the arts to impact his nation.

On Tuesday, Samaritan’s Purse will present a special screening of the movie “Facing Darkness” in the Center for Natural Sciences. The movie features stories of the heroes of the 2014 Ebola outbreak and the fight against uncontrollable disease outbreaks around the world. A panel of experts who have insight on the global disaster will host a Q & A before the film begins.

This week, 100 representatives from more than 50 global nonprofits and organizations will be on campus to talk to students about opportunities to serve.

In Wednesday’s Convocation, comedian and Grammy Award nominee Jeff Foxworthy will also talk about the work being done in Rwanda through Compassion International.

View the full schedule on the LU Serve website.