Cousins, on his way back home from Thursday night’s fourth and final preseason game at Tampa Bay, said he has learned to trust in the Lord to be his ever-present help in tumultuous times that are sure to come – on and off the football field. 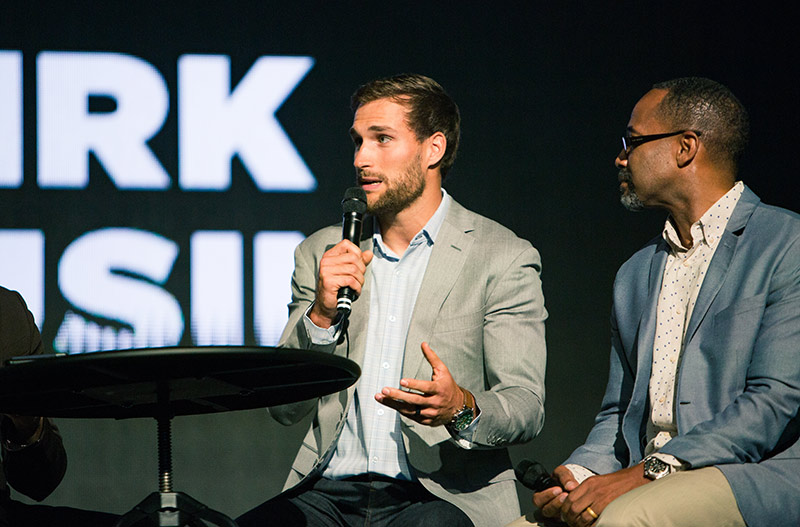 “One of the reasons God made me an NFL quarterback was to keep me close to Him,” said Cousins, who signed a one-year, $24 million contract in the offseason as the team’s franchise player. “I prayed about it, and I do believe that the Lord, at least in my life, likes to use one-year contracts and not long-term contracts. He likes to take me to the edge of the Red Sea and have me see there is water in front of me, there are mountains on either side, and there are Egyptians chasing me from behind. And He wants me to sit there for a moment and go, ‘God, You better show up.’ And then He parts the Red Sea and He’s done that time and again in my life, on the football field and off the football field. The Lord is a God who says, ‘I’m going to give you manna every day. I’m not going to give you manna for three years. You just get enough for today and trust Me for the rest.”

McKay joked that he had a Flames Club donation card for Cousins to fill out, and Nasser later pulled out a “letter of intent” for Cousins to sign, committing his first-born son, due in two weeks, to play football for the Flames starting in 2035. He also presented Cousins with a gift bag filled with Flames souvenirs, including onesies and toys. 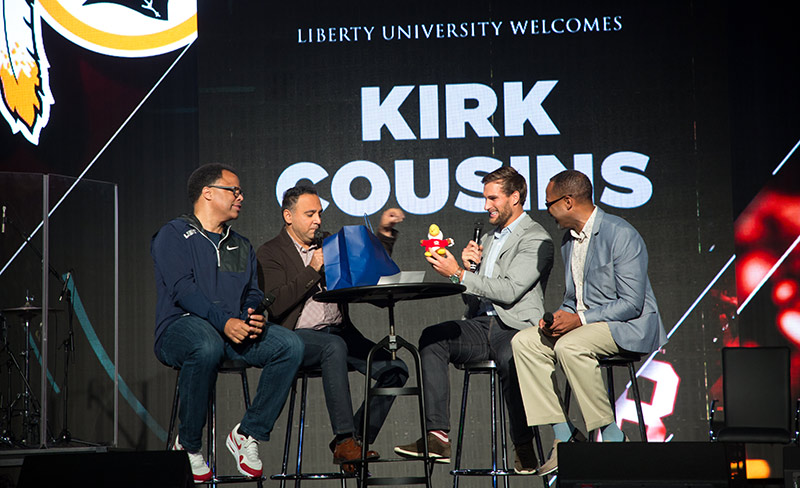 “This is a special place,” Cousins told the students. “Growing up in Michigan, I heard about Liberty. You’re a part of something special, so appreciate it, and enjoy it, and really use this privilege, and steward it well to really make a difference for His Kingdom.”

Even with the pressures of his NFL schedule, Cousins has demonstrated unwavering faithfulness to the Lord and to his family while he manages his responsibilities as the Redskins’ team captain. Although he can’t take Sundays off during the season, he reserves Mondays as his Sabbath Day.

“God truly can do more in six days than I could do in seven,” Cousins said.

Cousins, a pastor’s kid who went to a small Christian high school in Holland, Mich., remembered a challenge from his father that helped shape his faith before he set off to college.

“I remember leaving for college, and as I put the keys in the ignition to start the car, my dad came out into the driveway and said, ‘Kirk, you’re going to a major secular university, Michigan State, and we’re going to see if you can walk the walk, and not just talk the talk, as the rubber meets the road. That was when my faith really had to take shape, and by God’s grace, I was able to walk through that.”

An underdog all of his life, Cousins has performed under pressure in the nation’s capital, completing nearly 1,000 passes for more than 10,000 yards over the past three years and earning the fifth-highest quarterback rating in the NFL in 2015.

“The Lord has chosen my story to be one of being a little underrated, a little overlooked, and as a result, He gets more glory,” Cousins said. “If I had been a five-star recruit with 50 (college scholarship) offers and then been a first-round pick and was sitting here at Liberty, I would probably, down in my heart, say, ‘Well this is what was supposed to happen. I was supposed to do this, and I don’t know where God fits.’ The fact that I wasn’t (any of those things), I look around and I say two words: ‘Only God.’” 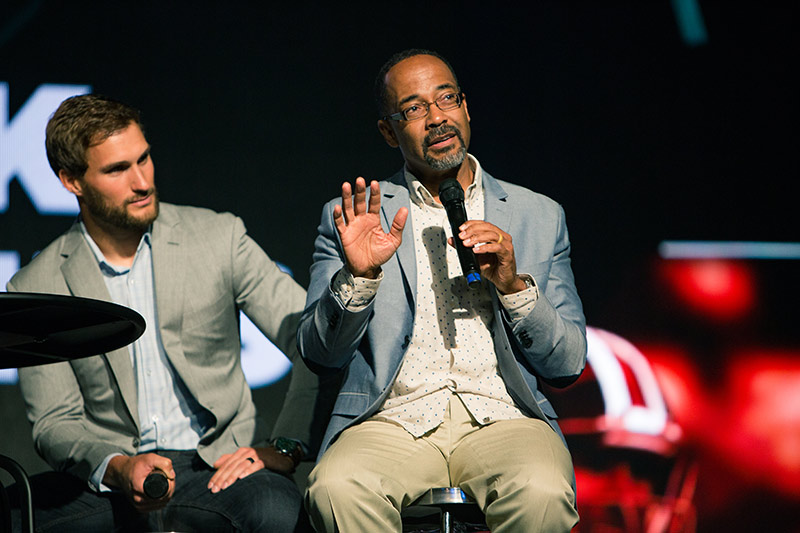 Fuller said Cousins, a 2016 Pro Bowl selection on the field, is a true witness off the field, too.

“He and his wife are model Christians,” said Fuller. “They serve as foundations for all of our chapel programs. He’s a guy his teammates lean on for prayer. He’s amazing. There are very few Christians in the league who have the kind of integrity, character, and witness that he has.”

Fuller is also the senior pastor of Grace Covenant Church in Chantilly, Va., and served on President George W. Bush’s Advisory Board for Historically Black Colleges and Universities. One of his daughters is currently attending Liberty.

Beyond serving as the Redskins’ spiritual mentor and advising players on how to be godly husbands and fathers, Fuller has been able to deal with racial tensions and divisions that exist within the team as well as throughout Washington, D.C., and the United States.

“It’s more than just being a chaplain to individual players about how to manage their lives and finances and the pressures they go through,” Fuller said. “It’s about trying to guide an organization to Kingdom progress.”