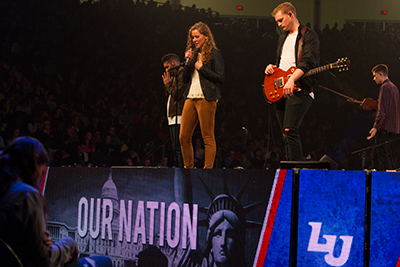 Whether students were watching the swearing-in of the president from the National Mall in Washington, D.C., or taking time to pray for our nation during Convocation, Liberty University took part in the 58th Presidential Inauguration on Friday.

Thousands gathered inside the Vines Center for a special Inauguration Day prayer service as part of Convocation. The Liberty Worship Collective opened the service with worship.

“Politicians come and go. Leaders are appointed by God for a season, but His name will remain forever,” Senior Vice President for Spiritual Development David Nasser said before leading the prayer time. “His name is the name that gives us hope.”

A member from each class, freshman to senior, prayed for the City of Lynchburg, the state, the United States, and our world. 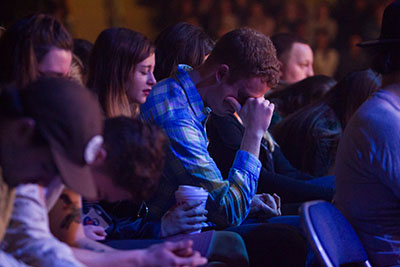 Nasser said the prayer service was special because Liberty students have an amazing platform to impact the country.

Nasser also introduced a video message to students from President Jerry Falwell and his wife, Becki, just moments after Falwell had read Scripture at a private church service for Donald Trump and select guests at St. John’s Episcopal Church and before they headed to the swearing-in ceremony. Falwell read his favorite passage of Scripture, Matthew 6:5-13, the Lord’s Prayer. He read from the same Bible that he had used during his time as a Liberty student in the 1980s. The Bible was filled with all of his notes and underlines.

Nasser then closed Convocation by reading the same passage. 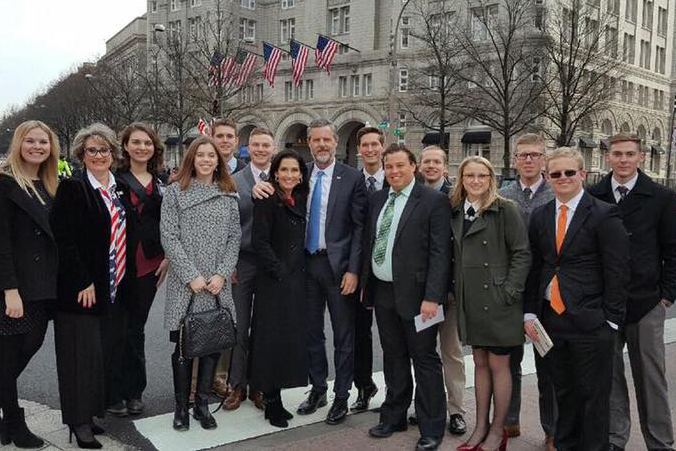 Classes that were scheduled immediately after Convocation were cancelled to allow students to watch the swearing-in of President Donald Trump and Vice President Mike Pence.

As students poured out of the Vines Center, 200 more students were working their way onto the National Mall and the West Lawn of the Capitol.

Sophomore Logan Smith said that although they were delayed getting to the National Mall, the students around them started pulling out their phones to watch the inauguration during the wait.

“Being on the mall made me feel like I was a part of history,” Smith said.

A journalism major, Smith said he was impressed with Trump’s inauguration speech.

“He never deviated from his initial message 18 months ago,” he said. “It’s nice to be able to say I went to Trump's inauguration. I will able to tell my kids that down the road.”

Senior Autumn Price, one of more than 40 history majors on the trip, said the experience was remarkable.

“The hope and energy you could feel in the crowd was fantastic,” she said. “It left me in awe.”

Price said she is extremely grateful to Liberty for giving their students the opportunity to view an historical event. 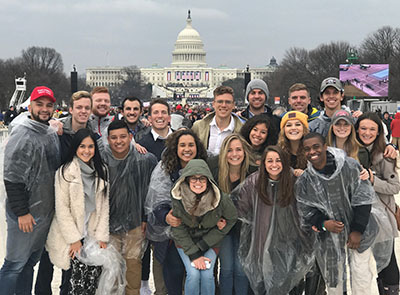 “The History Department worked so hard to put this together,” she said. “I had a blast and I will remember this trip for the rest of my life.”

The university reserved five buses for students to attend the swearing-in ceremony and parade on Friday. In addition to the Department of History, 14 Eagle Scholars (part of the university’s two-year leadership program) and members of The College Republicans attended inaugural events in D.C.

On Saturday, Liberty’s gospel choir, LU Praise, will sing at the invitation-only prayer service for President Donald Trump and Vice President Mike Pence and their families at the National Cathedral. The service starts at 10 a.m. A live stream will be available.