Almost one year after Liberty University received a $5 million donation from the Rawlings family to fund construction of the new Rawlings School of Divinity facility, including Freedom Tower, the university has announced that the family has given an additional $2 million toward the project. 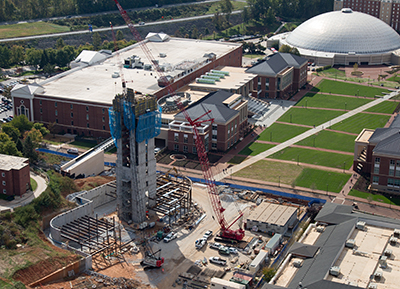 The 275-foot, 17-story tower and its extended three-level base is currently under construction. Crews are beginning on the 14th story this week. The entire project will be completed during the Fall 2017 semester, with a tentative opening of January 2018.

President Jerry Falwell made the announcement at Convocation on Wednesday, introducing George Rawlings to the students.

“This is breathtaking to see such fine-looking young people. I love this school; I love the Falwell family,” said Rawlings, president of the Rawlings Group, a comprehensive health insurance data mining and claims recovery company in Louisville, Ky. Rawlings was on campus for a tour with company executives.

George Rawlings was also recognized at Liberty on Nov. 4, 2015, when he joined his brothers, Harold, Herb, and Carrol, to announce the $5 million donation. The School of Divinity was named in their honor at that time. 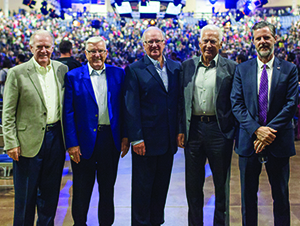 Their father, Dr. John Rawlings, was the president of Baptist Bible College in Springfield, Mo., where Liberty founder Jerry Falwell Sr. attended college in the early 1950s and roomed with one of Rawlings’ sons. John Rawlings, a pastor for over 70 years, was an adviser to Jerry Falwell Sr. in his ministry and in the establishment of Liberty University. He preached often in Lynchburg over the decades. In later years, Rawlings served on the Liberty University Board of Trustees.

The Rawlings family has strongly supported Liberty over the years, contributing greatly to the fulfillment of its vision to become a world-class Christian university.

In December 2015, the university also received a donation of rare books and Bibles valued at over $1 million from Dr. Harold Rawlings’ personal collection. It will be housed in the Freedom Tower’s scriptorium, which is also being made possible by the generous donations from the Rawlings family.

The Rawlings School of Divinity is the world’s largest accredited school for religious studies and ministerial training.

> Watch construction of the Freedom Tower in real time at Liberty.edu/LiveCams.

> Read more about the Freedom Tower's features in the Liberty Journal.