New students get taste of Flames football at Chancellor's Cookout 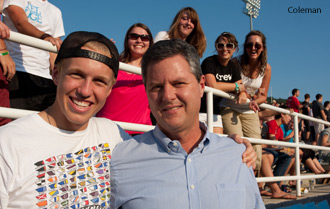 Chancellor Jerry Falwell, Jr. officially welcomed Liberty's freshmen, treating them to dinner on the grounds at the stadium. The freshmen have ruled the campus the past few days, as returning students will hit Liberty Mountain this weekend before classes begin on Monday.

The festive evening was scheduled for Thursday night; however, it had to be moved due to inclement weather. During the annual cookout event, Chancellor Falwell addressed the fresh faces to Liberty's campus and told them about the importance of athletics to the overall collegiate experience.

Following Chancellor Falwell's address, Liberty University Director of Athletics Jeff Barber also spoke to the almost packed west side of Williams Stadium, thanking them for coming out and giving them a bit of Liberty Athletics history.