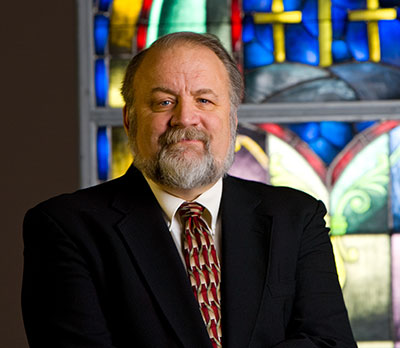 Dr. Gary Habermas, a distinguished research professor at Liberty University, chair of the Department of Philosophy, and professor in the Rawlings School of Divinity Ph.D. program, spent three weeks this summer lecturing in England, including at Cambridge University, with 40 total speaking engagements.

Habermas is well-known worldwide for his research and writings in regard to Christian apologetics and the resurrection of Jesus. He is a popular speaker and author, co-author and editor of 41 books, with more than 100 articles and reviews published in prestigious journals and magazines. He has contributed to more than 70 chapters or articles in additional books. In recent years, Habermas has been a visiting or adjunct professor at more than 15 different graduate schools and seminaries in the U.S. and abroad.

Habermas has made several visits to England. He said that he started lecturing there when a friend told him about the need for Christian philosophers in the country.

“England is a secular country and people are not used to hearing reasons for religious belief,” he said. “While there, I was able to tell people that not only is Christianity true, but there is evidence for it. This takes people by surprise, because they do not often hear Christians say they have evidence for their faith.”

While on the trip, Habermas had the opportunity to lecture two times a day on the relevant historical, philosophical, and theological issues surrounding the death and resurrection of Jesus. Some of his most prominent speaking engagements included Cambridge University, Tyndale House Cambridge, and the Round Church, which is the oldest building in Cambridge.

“I received positive feedback overall,” he said. “People told me that my works rescued them from atheism, and now they are Christians. I was also told by other professors that they need these materials in their universities.”

Additionally, Habermas was interviewed by the BBC on his beliefs regarding the truth of Christianity.

Habermas said that wherever he goes, he introduces himself as a professor at Liberty.

“Some people might go to a place like Cambridge and hide the fact that they are from an evangelical affiliated school, but that is part of my ministry message,” he said. “The field of apologetics and the resurrection, in particular, is my first love. Anytime I get to talk about it I am thrilled, because I think people need to hear there are reasons to be a Christian. I want people to go away thinking about the fact that here is someone saying there is evidence for Christianity, and they should not ignore it.”

Habermas said that he plans to return to England next summer. He is currently contributing a chapter to a book of dialogues between well-known skeptics and evangelical philosophers, where he will present evidence and research on near-death experiences.