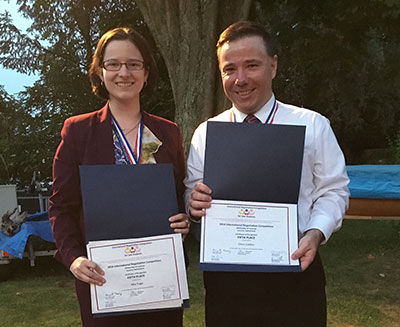 Liberty University School of Law represented the United States in the International Negotiation Competition (INC) held at the University of Lucerne (Switzerland) July 4-9. Liberty Law’s team captured a fifth-place finish out of 21 countries invited to compete in this annual world competition.

The Liberty team of Chris Collins and Mia Yugo, both of whom recently graduated from Liberty Law and are now studying for the bar exam, traveled to Switzerland after Liberty earned a second-place finish in the 2016 American Bar Association (ABA) National Negotiation Competition held in San Diego, Calif., in February. Collins was teamed with Katerina Silcox for the national competition. Yugo was selected as the team alternate since Silcox was unable to attend the international competition.

In the past 10 years, eight Liberty teams have been invited to the ABA National Tournament and have been ranked in the top 20 teams in the country.

The international competition consisted of three rounds of negotiations. In the first two rounds, the teams had 60 minutes of negotiation and were judged based on strategy, style, creative solutions, and outcome. Each round was scored by a panel of three international judges with no elimination rounds. Since the tournament was based in Switzerland, the tournament problems for all three rounds involved various business scenarios related to the production of chocolate and what that entails on an international scale — buying beans from a producer in one country, shipping them to another buyer in another country, labor issues related to cacao farming, and pairing with other businesses to mass produce a specific type of haute chocolate.

In the first two rounds, Liberty faced teams from Northern Ireland and Norway. The final round was more complex and consisted of a four-way negotiation against teams from Indonesia, South Korea, and Switzerland. After the three rounds were completed, the scores from each round were combined.