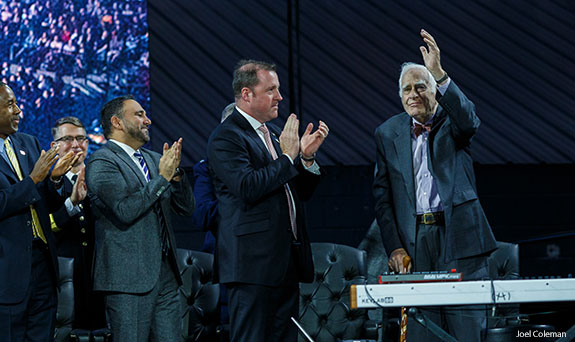 Before presidential candidate Dr. Ben Carson took the stage for Convocation on Veterans Day, Liberty University honored the legacy of a local and national hero. World War II veteran George Rogers, a Lynchburg resident and former Liberty administrator, sat on the stage with Carson and President Jerry Falwell, who shared the story of a true hero and Champion for Christ. The crowd gave Rogers a thunderous standing ovation.

Rogers was a longtime administrator at the university, serving from 1974-99, starting as its chief financial officer and most recently as vice president of finance and administration. Falwell said Rogers was a mentor to him during the ’80s and ’90s and said his frugality and financial wisdom helped navigate Liberty through some of its toughest times.

“I learned so much from George over the years,” Falwell said. “He was known as ‘Mr. No.’ He was the financial guy that turned everybody down whenever they wanted to spend money all those years. A lot of what is here now is because of his financial management to help this university.”

But before Rogers came to work for Liberty, he had nearly given his life defending liberty. Rogers was captured by Japanese forces — along with 75,000 American and Philippine troops — while serving in the Philippines in World War II. He was among the few survivors of the Bataan Death March, where soldiers were forced to march about 75 miles in five days before being sent to POW camps (approximately 7,000 of the 10,000 prisoners died). Abuse and starvation claimed many lives. During his three-and-a-half year imprisonment, Rogers, who is 6-foot 3-inches tall, was reduced to a mere 85 pounds.

After his rescue, Rogers was told that he would likely die around age 40 and never be able to have children.

“He is now 96 years old,” Falwell said. “He has five children, 18 grandchildren, and he just recently returned to Japan.” The Japanese government has been sponsoring trips for former POWs to establish friendship and seek forgiveness. (The News & Advance, Lynchburg’s local newspaper, chronicled this journey).

Despite everything he was put through, Falwell said Rogers is not bitter.

“He never held any animosity toward his captors,” Falwell said. “He displayed a true Christian spirit toward people who many of us would have been tempted to hate and revile for what they had done.”

In 2012, Rogers received the Purple Heart and the Prisoner of War Medal.

Liberty has honored Rogers’ legacy by founding the annual George Rogers Champion of Freedom Award in 2010. It is given annually to a man or woman who served in the United States Armed Forces and went above the call of duty, displaying extraordinary heroism while serving. The award is presented during the halftime celebration of the football game that caps Liberty’s Military Emphasis Week. A bust of Rogers with the names of award winners is on display inside the main gate of Williams Stadium.