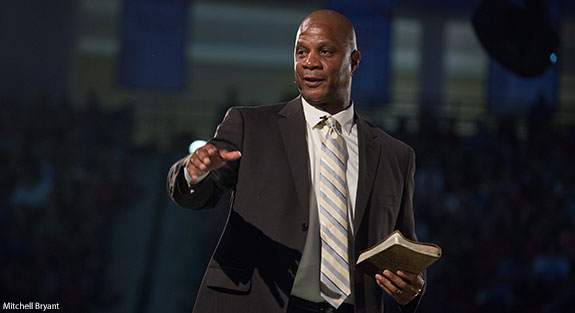 Darryl Strawberry, who won four World Series with the New York Mets and Yankees, didn't find his purpose in life until he surrendered it to Christ, as he shared in Liberty University's Convocation on Monday, Oct. 12, 2015.

World Series champion Darryl Strawberry’s transformation from drug addict to pastor and soul winner is a miraculous story of how God can use a man who has fallen from grace to reach a lost world for Jesus Christ. Strawberry shared his story during Liberty University’s Convocation on Monday morning, challenging students to find their identity in what Christ did rather than in what they do.

He was featured on the cover of Sports Illustrated seven times and made the Major League All-Star Game eight times.

On a personal level, Strawberry’s life has been shaken by drug and alcohol abuse, adultery, imprisonment, and bouts with colon (1998) and kidney (2000) cancer. He has faced financial ruin as well, despite more than $30 million in earnings over a 17-year career.

“I wasn’t always like this,” Strawberry said, calling himself a sinner saved by grace. “There was a time I was a heathen; I was a liar, cheater, womanizer, alcoholic, drug addict. I was rich and famous, but just like (Mark 8:36) says, ‘What does it profit a man to gain the whole world and lose his soul?’ That was me.”

Stardom came at a tremendous cost for Strawberry, who was raised in Los Angeles and played for the Lynchburg Mets in 1981 at nearby City Stadium before quickly rising through the ranks and arriving in New York in 1983.

“When I was young, I came from a broken family,” Strawberry said. “My father was an alcoholic. He beat me, said I would never amount to nothing. But I go on to be drafted as the No. 1 pick (in 1980).”

The pain and rejection he received from his family gave him the inner drive to achieve greatness.

“And my greatness is what led me to self-destruction, because I had everything, but I had nothing,” Strawberry said.

During his rookie year in New York, veteran Mets players introduced the 21-year-old Strawberry to cocaine on his first road trip. His career skyrocketed, but he was dying on the inside.

After his rookie year, he signed an $8 million contract with the Mets at the age of 22, and then, seven years later, signed a $20 million free-agent contract with his hometown team, the Los Angeles Dodgers.

“I was miserable, because I already had cars and homes,” Strawberry said. “I had a bunch of stuff, but it was emptiness inside.”

Strawberry said he gave his life to Christ in 1991, soon after signing that contract, but it only led to a downward spiral.

“I got saved, but I didn’t get discipled, and I went back to the familiar and all Hell broke loose,” Strawberry said.

According to Strawberry, he was deceived by the devil, whose purpose is to steal, kill, and destroy (John 10:10), but eventually he found his identity in Christ, who came to give abundant life.

“The devil comes to steal your identity, so you do not know who you are,” Strawberry said. “The devil is a liar because he wanted my soul. You see, he didn’t care about me being rich and famous. He didn’t want me to know Jesus, because if you ever know Jesus, you have victory in Christ.

Strawberry has found his purpose in serving as a pastor, going into prisons and preaching the Gospel, and establishing the Darryl Strawberry Foundation for Autism Awareness and Strawberry Ministries, which has started three recovery treatment centers for young adults addicted to drugs.

“It wasn’t until I lost everything, and I almost lost my life … God made it clear that it’s not about me, it’s about Him,” Strawberry said. “I’m only here because I’ve been covered by God’s grace. I asked God, ‘Why do I exist?’ And He said, ‘Because I want to use you.’

“We’re all called according to God’s purpose. When we understand that, God will use you mightily.”

Rather than drugs, Strawberry is now addicted to Jesus and wants to share His message wherever he goes. As Campus Band took center stage, Strawberry concluded Convocation with an alter call.

“I have been crucified with Christ,” he said. “My life has been transformed. I no longer live. It is Christ who lives through me. The Holy Spirit taught me the Bible, and He empowered me to teach the Word of God. I am resurrected to speak life through His Word.”