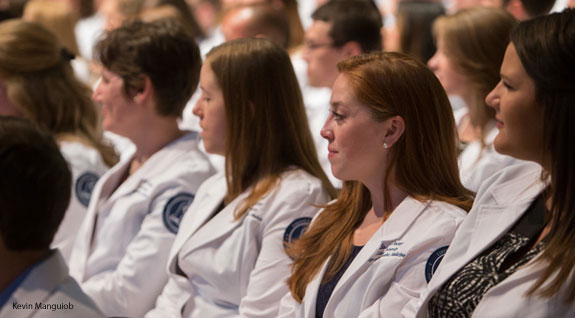 The newest class of student-doctors, preparing to begin their medical education at Liberty University College of Osteopathic Medicine (LUCOM), were formally welcomed on Saturday, Aug. 1, during the second annual White Coat Ceremony.

Each of the 160 incoming students, who start classes Monday and are scheduled to graduate in 2019, were coated by a LUCOM faculty member and given three symbolic pins: one bearing the official seal of LUCOM, the second provided by the Virginia Osteopathic Medical Association (VOMA), and the third provided by the Arnold P. Gold Foundation. The Arnold P. Gold Foundation originated the White Coat ceremonies in 1993 to advance an emphasis on the fostering of empathy, compassion, and patient centered medicinal practices, as well as, education principles, instead of the prevalent educational and student focus on the treatment of disease, from the very beginning of a student’s transition into the medical profession.

“On behalf of your sons and daughters, let me thank each of you for a lifetime of support and what each of you have contributed to bring to us at the college, and in the profession, such fine young men and women; we are in your debt,” he said. “No one gets to this point by themselves.”

Martin explained the significance of the White Coat Ceremony, calling it a “rite of passage, symbolizing not only a commitment to academic and scientific rigor but also a commitment to empathy, compassion and caring for the patient.”

He challenged the students to not take lightly the calling they are pursuing.

“To preserve and honor the doctor-patient relationship, your future patients must have trust in your actions and intentions, they must believe that they are taken out of concern for their health, wellness and happiness, not personal or professional advancement or advantage. They must be confident that you are recommending medical care for their benefit, not practicing on them for personal gain.”

Martin said the day marked an “alpha,” a beginning of a lifetime of commitment to excellence and learning.

“Medical professionals have a special responsibility to be lifelong learners, passionate caregivers, and trustworthy professionals,” he explained. “The welfare and health of those whom they will serve depend upon them.”

Dr. William G. Anderson, D.O., a personal friend of Martin, delivered the keynote address. A distinguished osteopathic physician and surgeon, Anderson is also a civic and human rights leader and educator. He was the first African American to serve as president of the American Osteopathic Association, among many other notable accomplishments. He currently serves on the board of Edward Via College of Osteopathic Medicine and is a senior associate dean at Michigan State University.

Referencing the late founder of Liberty University, the Rev. Jerry Falwell, Sr., Anderson said that it was often tests of Falwell’s strong faith that built the institution.

“Liberty University is a dynamic place. The vision from the beginning was to have a world-class university, including a top-ranked medical school, and would produce excellently trained physicians, who would positively impact the world,” he said. “As members of only its second class, you are a testament to that vision.”

He gave the Class of 2019 three points to remember: “Keep your eyes on the prize; it’s no longer about you; and never lose sight of your vision.”

“Medical practice is, simply put, service to others. Patients should feel your compassion and believe in your commitment,” he said.

In closing, Martin offered these final words to the class: “When you have to make a choice, do the right thing. Leadership is about doing the right thing. As osteopathic physicians, you are striving to become leaders.”

The ceremony concluded with the students reciting the Osteopathic Oath, pledging to uphold the principles of the profession with integrity.