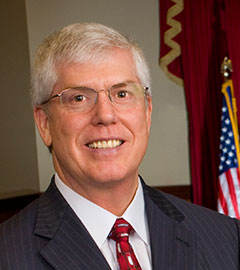 Liberty University President Jerry Falwell announced the resignation of Liberty University School of Law Dean Mathew Staver on Monday during the university’s All-Faculty Meeting, honoring him for his more than eight years of service.

Falwell said it was by Staver’s leading that the law school was established in 2004, calling it a “big undertaking and bold commitment” for the university to make after struggling financially for many years.

“Mat was the one who pushed hard and convinced us it was the right thing to do,” Falwell said.

He congratulated Staver for steering the law school through its first ABA accreditation approval process (no other university has obtained ABA provisional status in a shorter period of time) and for helping the university select a founding dean before Staver himself took on the position in 2006.

“We officially thank you for all you’ve done to make Liberty University School of Law successful,” Falwell told Staver.

Staver has been an integral part of the law school since its inception a decade ago. He is the founder of the nationally recognized religious liberty litigation and education public interest organization Liberty Counsel, the author of more than 10 books and more than 120 published, precedent-setting legal opinions, and has argued before the Supreme Court.

Over the eight-and-a-half years of his tenure, Liberty Law has not only garnered national recognition for its Lawyering Skills program and sent out winning trial and moot court competition teams, but it has flourished in a barren legal landscape — last year Liberty’s residential Juris Doctor program boasted a 25 percent increase in enrollment while over two-thirds of law schools in America experienced an enrollment decline. The School of Law also began a partnership with the Helms School of Government to offer a Master of Arts in Public Policy degree as well as certificate, associate, and bachelor’s degrees in paralegal studies. A few months ago, the law school received its largest gift in history.

Though Falwell said Staver’s desire was to relocate for some time, he thanked him for remaining in order to see Liberty Law’s re-affirmation of ABA accreditation. On Oct. 16, the ABA’s final report confirmed that Liberty Law has met every standard and will now be on the regular seven-year cycle for re-affirmation. The re-affirmation process for the law school is comparable to the process the university has for its accrediting body, the Southern Association of Colleges and Schools (SACS).

Staver released this statement following the announcement: “While I have mixed emotions stepping down as dean, I know this is the right decision and the right time. This is a hard decision because the law school is like my child. I was there before it was birthed, during its birth, and now I have seen it mature. I have had the pleasure of working with many fine people at the law school and the university. As we celebrate the 10-year anniversary of the law school, I am pleased to report that it is poised to enter the next 10 years in very good shape."

Staver said the decision will allow him to spend more time with his wife, who has been receiving specialized medical attention in Florida after a car accident over a year ago. He will continue to serve as a consultant and an advisor to the law school and to President Jerry Falwell.

Falwell announced that Rena Lindevaldsen, associate director of Liberty Center for Law and Policy, associate dean for academic affairs, and a Liberty Law professor, has been named interim dean. Prior to her career at the university, she served as senior litigation counsel to Liberty Counsel, where she was actively involved in efforts throughout the country to preserve traditional marriage through litigation, legislation, and constitutional amendments.