Liberty University presented John S. Kim with an honorary doctor of divinity degree on Wednesday, Aug. 13, for his dedication and commitment to furthering his father’s endeavors. Kim’s father, Dr. C. Daniel Kim, is a distinguished professor who has taught at Liberty University Baptist Theological Seminary (LBTS) for more than 35 years and has ministered to thousands of Korean students.

President Jerry Falwell bestowed the degree, given for John Kim’s “unflinching commitment to the preservation of liberty in America and in acknowledgement of his innovative and principled leadership.”

Kim has had a successful career in biostatistics, working for one of the largest medical companies in the world as chief statistician. He retired in 2007, but has remained a statistical consultant while training for full-time ministry. Kim earned his master’s degree in biblical studies from LBTS in 2011, and has provided more scholarships for Korean students than anyone else.

It has been his father’s lifelong dream to start a seminary in his home country of North Korea, and John Kim is committed to fulfilling that dream.

“It is Liberty’s hope that this degree, this recognition of his passion for Korea, will help him further that goal,” Falwell said.

“This is just humbling. I am grateful and honored,” John Kim said. “As we attempt to establish an educational foundation in North Korea, I think this degree will be instrumental.”

Dr. Daniel Kim joined his son for the degree presentation, where Falwell noted that Daniel Kim’s contributions to the university have been invaluable. Approximately 1,400 Korean students — 220 this year — have enrolled in the seminary over the years, with thousands more studying in other programs at the university.

“Most of those students came here because of Dr. Kim’s efforts and his passion for Korea,” Falwell said.

North Korea has been under communist rule for nearly 70 years and is currently closed to the Gospel. In 1946, Daniel Kim was nearly imprisoned and executed for his faith. Instead of Kim, however, the government apprehended, and subsequently released, the wrong person. At that point Kim knew that God had spared him so that he could devote his life to ministry. He left his homeland and served as a pastor in South Korea before coming to the U.S. to finish his education. He has been teaching in Liberty’s seminary since 1978.

It was very meaningful for Kim to see his son receive the degree. He is confident that the day is approaching when the Lord will open his homeland to the Gospel. 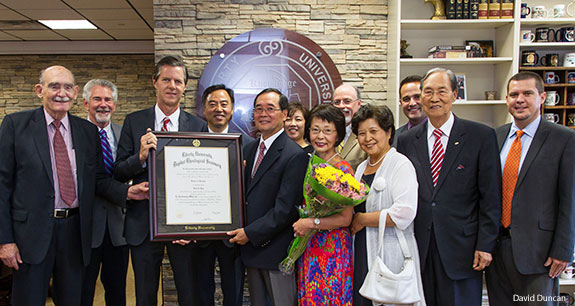