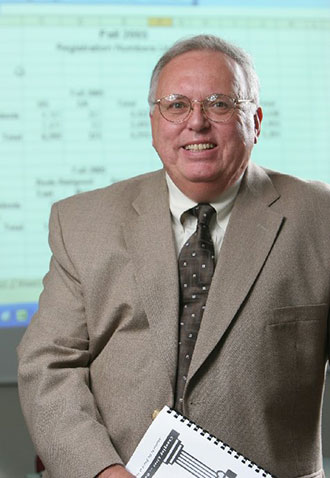 After serving Liberty University for nearly 12 years, Larry Shackleton will retire from his role as registrar and vice president of administrative information management on Dec. 31.

"On behalf of the Liberty family I would like to say we are all very grateful for Larry Shackleton's years of service to the university," said President Jerry Falwell, Jr. "Liberty has been blessed to have someone with such a high level of skill, competence, and professionalism in the leadership roles he has served. God used him to play an instrumental role in the monumental task of building the internal infrastructure the university needed to serve tens of thousands of students."

Shackleton was at the helm of the registrar in 2007, when Liberty became the largest Christian university in the world. Now with more than 100,000 online and residential students, Liberty's mission of Training Champions for Christ is unchanged, and Shackleton has been pivotal in making it the exciting university it is today.

During his years of service, Shackleton worked tirelessly to improve the relationship between Liberty’s students and the Registrar's Office — which oversees both university reporting and Commencement, among other things. He created the Student Service Center as a "one-stop shop" where students can get assistance with financial aid, student accounts, registration, and graduation.

Shackleton praises the staff of Liberty's registrar office as the team that keeps the campus moving behind the scenes.

"The staff in the registrar's office are hard-working, over-achieving people who do things without fanfare, and with no hint of needing recognition for it," he said.

Shackleton remembers starting his job in 2002 during the construction of the Arthur S. DeMoss Learning Center. Liberty’s growth since then has been "one of the most exciting challenges about working here.”

"The campus was in a construction zone when I arrived and is still in a construction zone,” jokes Shackleton. “Nothing much has changed except now we have more students, more faculty, more staff, better facilities, and an overall campus that attracts students and faculty from all over the world. President Falwell and his wife, Becki, understand what students need in a campus and they have provided it."

One of the construction projects Shackleton is most pleased to see completed is the new Jerry Falwell Library, which opens Jan. 15, 2014. “The library is the cornerstone of any great university,” he said.

Shackleton first came to Liberty as a consultant for an educational software company, a job that allowed him to visit university campuses across the U.S. In retrospect, Shackleton believes God was working in his life, preparing him for leadership at Liberty.

"When you reflect on the things that happened — the signs that God put out there for me that I never noticed as they were happening — you see the knowledge, the wisdom, and the way that God prepared me for every aspect of what I had to do at Liberty. It was a God thing," Shackleton said.

While Shackleton's role in Liberty's growth is undeniable, he cites the vision of Liberty's founder, Jerry Falwell, Sr., and the developmental strategies of Senior Vice President for Academic Affairs and Provost, Dr. Ronald S. Godwin as key reasons why Liberty has become the force it is today.

Shackleton's ambition to make Liberty a place "where students have the ability to change their own lives" motivated him to excel during his 11-plus years at Liberty.

"Life is all about relationships and people," he said. "It is all about a relationship with the Lord and being able use that relationship to impact the lives of others. I am blessed to have been able to serve the Lord here at Liberty. I have looked forward to coming to work every day. How many people can say that?"