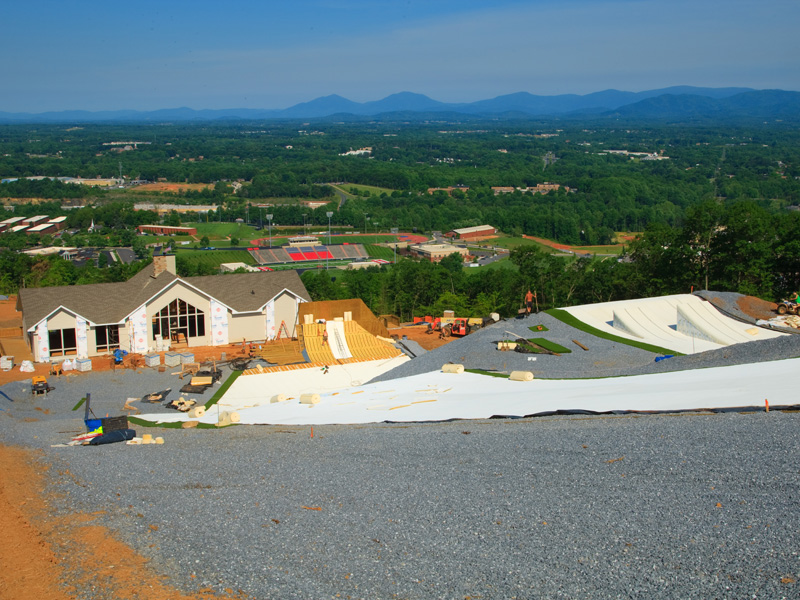 Photos taken this week document the ongoing construction of Phase 1 of the Liberty Mountain Snowflex Centre and of the nearby rental facility building. For more information on the project, go to Liberty's Snowflex website.

As rain fell on Thursday, several personnel tasked with building Liberty University’s year-round ski slope decided to take a break from the construction. Instead of grabbing a quick snack, the workers, who are also European freestyle skiers and snowboarders, took turns testing out the artificial incline. Beginning at the slope’s cornice drop, the freestylers barreled downhill, catching huge air off the kickers and tabletop.

Two-time British freestyle champion Joe Tyler was among those performing tricks. Tyler, a pro skier sponsored by Armada Skis, Relentless Energy Drink, Adidas Eyewear and Helly Hansen, began training and competing on Snowflex slopes in Europe eight years ago. The freestyler said that once the Liberty Mountain Snowflex Centre is complete, beginning, novice and expert riders will be able to easily perfect their craft.

“It caters to everybody,” he said. “If you want to just practice your turns you can do that. The main thing is that it’s really good for freestyle. You can really pick up your basics.”

Tyler added, “It will take you a little bit to get used to it. It’s soft like snow, so when you are landing it doesn’t hurt your legs. It’s a quite nice feeling when you are coming down.”

Shaun Waddingham, managing director for Briton Engineering was also at the slope on Thursday. Waddingham, who is currently overseeing the Snowflex installation, said he is pleased with the feedback received from those testing the slope’s features.

“The kickers are absolutely perfect; the riders are saying everything is right,” he said. “The landing area is the biggest one we have ever done. It makes it very safe, but actually makes it quite interesting to look at, as well.”