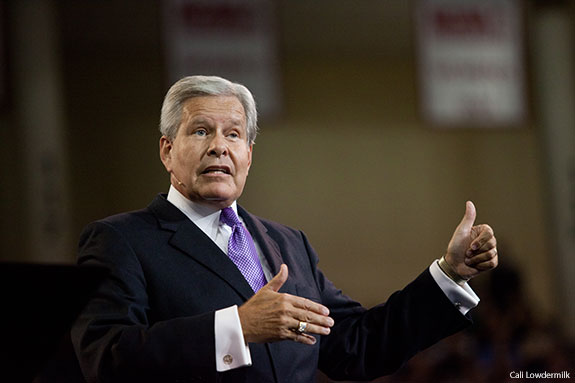 Former Congressman Bob McEwen returned to Liberty University on Wednesday to deliver the Convocation message about how to measure the greatness of a nation.

McEwen served as a representative for Ohio in the U.S. House of Representatives for six terms. While in office, he and U.S. Sen. Robert Dole participated as observers in Warsaw, Poland, to the first-ever parliamentary election of a non-Communist leader of a Soviet bloc country, which led to the destruction of the Berlin Wall. He is currently the senior advisor with a nationally recognized law firm.

“(McEwen) is a public speaker like none other,” Chancellor Jerry Falwell, Jr. said as he introduced McEwen Wednesday. “He does better at communicating the founding principles of what this country is all about better than anyone I know.”

McEwen crafted his message based on historical analysis and principles of America, drawing from nearly every era in American history. He applied the lessons from the past to demonstrate the standards by which we should measure the greatness of our nation: the strength of its economy, military, politics, and leadership.

McEwen also spoke on the role of government, politicians, and civic duties. He encouraged students to understand the founding principles and match them to today’s government.

“This country is a unique place and you hold the key to where it goes,” he said.

In light of the presidential election next week, McEwen encouraged students to vote for a leader who will not fear the future, but will stand for the founding principles.

“A leader knows what needs to be done and why,” McEwen said. “In a time of crisis we need leadership. The Chinese terms for crisis are danger and opportunity. That’s where we are now. We are at a dynamite of opportunity.”

McEwen also held a special session in the afternoon for students of the Liberty University Helms School of Government, speaking to about 200 in the Club Pavilion level of Williams Stadium about the wealth of a nation. The session was video recorded for future use.

He stressed the free enterprise system in government and encouraged students to be wise in their life, government, and studies, defining wisdom as “the proper use of knowledge.”

McEwen also held a Q-and-A after the session, interacting and conversing with several students in a personal manner.