Before making her college choice, rising junior Opal Lowther, who is double-majoring in government and English at Liberty University, sought four distinct criteria: a large campus with state-of-the-art facilities, challenging professors, a rich culture of communal worship, and, most importantly, a welcoming campus open to civil disagreements. 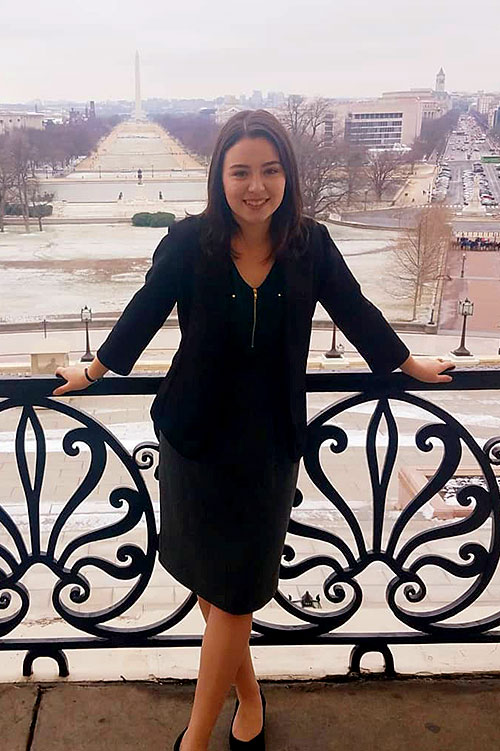 At first, she didn’t even consider Liberty given the distance from her hometown in Kansas. But her focus quickly shifted.

“At the state colleges around me, there was an underlying expectation that keeping everybody comfortable was a priority,” Lowther said. “I was looking for a place where I could really contribute to the culture, and where the resources would give me a wide variety of voices, and where I would be expected to defend my beliefs and not always be comfortable.”

Lowther grew up in rural neighborhoods in Colorado and Kansas and attended most of high school alongside 19 other students. Before her senior year, she lived in Stafford County, Kansas, a small town of roughly 1,000.

Her world was small, but her dreams stretched beyond.

Through the Washington Fellowship, a semester-long internship program hosted by Liberty University, Lowther received an opportunity to work at a congressional office in Washington, D.C., this summer.

“It always feels very surreal and unlikely that I am in Washington, D.C., after growing up in such a small place,” Lowther said. “It made me believe that education is largely up to my hard work and attitude.”

The Washington Fellowship is open to Liberty students from all degree programs, giving them the opportunity to work and experience daily life in our nation’s capital. This summer, there are 21 students participating in the program. Internship placements include the National Park Service, Salvation Army, U.S. Marshals Service, and Family Research Council. Some students even receive job offers before graduation.

“The Washington Fellowship is such a dynamic way to gain more training during the summer,” Lowther said. “It provided a very unique place where I could learn how to be a Christian in the workplace, how to be myself when discussing policy, and how to be a good servant leader in a government office.”

Healthy debate cultivated her love for government, and purposeful discussions and a culture of deliberation prompted her to attend Liberty.

In this regard, she said Liberty stood out. It not only offers her a strong education with challenging professors and opportunities like the Washington Fellowship, but it also provides an atmosphere that challenges her ideals. Lowther said she did not want to attend a school with strict, excessive “speech codes” (an institutional policy to avoid words that could be deemed offensive by a certain group) and language guidelines.

“I wasn’t looking for a place to be comfortable, or a place where speech codes were a way to talk to one another,” Lowther said. “Speech codes are a backdoor way of shifting the discussion to one side … it hinders peoples’ ability to discuss topics without a bias. It’s OK to learn what might offend someone, but speech codes, or suggestions that are listed out with alternatives … narrow your view of the world rather than broaden it.”

In October 2018, Lowther attended a pro-life panel at Liberty, featuring a Republican, Democrat, and Libertarian. Students in attendance had opportunities to engage in conversation and ask difficult questions. These types of events, according to Lowther, cultivate an open atmosphere of civil discourse.

Last semester, the College Republicans club at Liberty hosted a panel-style discussion titled “Coffee with a Democrat” and invited the College Democrats club from the University of Lynchburg to discuss topics like immigration, the welfare system, and education.

All panel interactions were civil, despite disagreement, according to Timothy Murcek, former chairman of Liberty’s College Republicans.

According to Murcek, the event nurtured an atmosphere of bipartisan conversation, not emotional response.

“It was a great experience,” said Murcek, a senior who will graduate in December with a degree in politics and policy with the Liberty’s Helms School of Government. “I think everyone really enjoyed it and got a different perspective and realized that finding common ground is possible. I think conversations like that should happen more often.”

Liberty’s diverse lineup of thrice-weekly Convocation speakers also contributes to Liberty’s vision of exposing differing ideologies to students. Although Liberty does not endorse each speaker’s views, the goal remains the same: to welcome opposing viewpoints and cultivate discussion.

“Convocation speakers are a good aspect of Liberty largely because they give individuals on campus something to discuss together,” Lowther said. “It doesn’t replace person-to-person conversations in my life, but it often gives me a good subject to talk about.”

“I really appreciate Liberty’s efforts to bring other guests with differing points of views,” Lowther said. “If we as students continue to show respect to guests, we can positively grow our platform and have more opportunities to talk to one another about various issues.”

In March, Falwell attended the signing of an executive order by President Donald Trump that requires colleges and universities to protect free speech on campuses in order to be eligible to receive federal research money. Falwell recently published an article in the Liberty Journal on free speech, where he noted that “even though Liberty University is a private institution that cherishes its Christian values, we’re not afraid to expose our students to the views of those on the left — even the far left.” Read the full article, “Free Speech: A Welcoming Campus Has Spoken.”

“Falwell’s attendance at President Trump’s executive order continues a nationwide discussion about higher education,” Lowther said. “I recommend to prospective college students that they consider the culture of discussion on a campus and take responsibility for the way they speak to others. Higher education lives in person-to-person interaction; I hope to continue to pursue discussion with others at Liberty, from professors to President Falwell to roommates.”