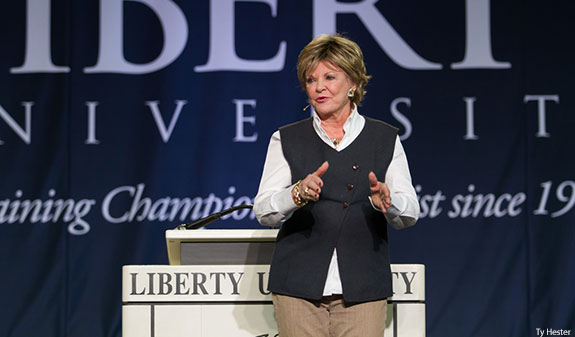 Excitement and respect swept across the Vines Center at Liberty University Friday as the lively, passionate, renowned Bible teacher and founder of Precept Ministries, Kay Arthur, took the stage in Convocation.

“She has done more than anyone alive today by introducing people to the word of God through the methodology of inductive Bible study,” said Johnnie Moore, vice president of communications.

Arthur, 79, has reached more than 75 million people worldwide through the various daily television, radio, and online programs she hosts. She is the author of more than 100 books.

Yesterday, Arthur was a guest lecturer for women’s ministries classes in Liberty’s School of Religion.

She began by sharing a brief testimony of how she came to know the grace of Jesus at the age of 29. Early in her adulthood, she had pursued a “country-club” life desiring luxury and the perfect family. She married an aspiring baseball player, who she later found out had bipolar disorder. After six years of marriage, she divorced him and had an affair with a married man. Her ex-husband committed suicide at 31 years old.

“I began to think about the fact that I would stand before God. I am going to stand before a living God,” Arthur said. “Sin is very, very costly.”

Arthur explained that in her struggle with sin and immorality, she found the grace of God and through that has been able to live a redeemed life proclaiming the Gospel.

She encouraged students to do the same.

“I have come to tell you that I have a great burden on my heart and it is such a privilege to speak to you because of that burden. You can change the world if you are absolutely and totally sold out to God,” she said.

Arthur challenged students to evaluate the sin that overwhelms America as a result of “setting ourselves above God” and “exchanging the truth of God for a lie.” She reminded them that even though it is not “socially acceptable” to talk about sexual immorality, God is loving and just and holds everyone accountable.

She urged them to stand for truth — exposing the deeds of darkness, proclaiming Christ’s salvation to all, and not fearing what others may say in response.

She closed by challenging the audience: