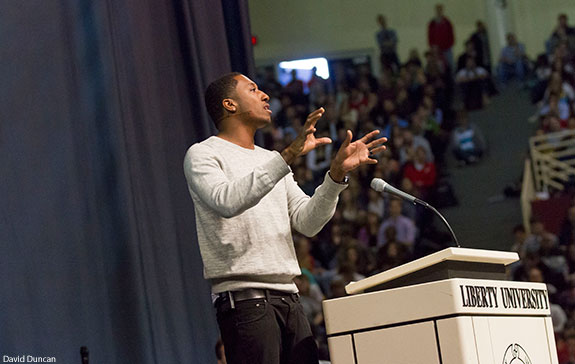 Following a passionate time of worship at Liberty University Convocation on Friday, Grammy award-winning hip-hop artist Lecrae questioned the notion that there is a divide between “the sacred and the secular.”

“The earth is the Lord’s, and everything thereof … everything belongs to God,” he declared. “We live fragmented lives. Church and family rarely speak to our work and our public life. (We say) ‘I will be one way here and another way there.’”

This was Lecrae’s first time addressing the student body in Convocation. He returned to the stage Friday night for a sold-out concert, sponsored by Student Activities and featuring Andy Mineo and Propaganda.

Lecrae is the co-founder of Reach Records and unashamedly shares his Christian faith through his music. In September 2012, his latest album, “Gravity,” became the No. 1 Rap, Independent, Christian, and Gospel album in its first week, reaching No. 3 on the Billboard 200. Lecrae is also the co-founder of ReachLife Ministries, which seeks to equip leaders for discipleship, evangelism, and leadership in the urban context.

“He is easily one of the best people in the entire world at what he does — he is known for that regardless of being a Christian or not,” said Johnnie Moore, vice president of communications. “He happens to also be an outspoken follower of Jesus Christ; he is unashamed of that, he demonstrates a deep and relevant relationship with Jesus Christ.”

The authenticity of God’s work in Lecrae’s life was evident as he passionately challenged the packed Vines Center crowd to reclaim creation for Christ and redeem culture, art, and the workplace for Him, using whatever vocation they pursue.

“You are going to engage the real world,” he told students. “Most of us tend to have bifocals, we see the world as split” between what is Christian and not.

He used the story of Daniel the prophet from the Bible to explain that any vocation, even the pagan practice of interpreting dreams, can be redeemed by God and used for His glory and to transform people’s lives.

Lecrae delivered three keys to impacting culture, the workplace, and ultimately the world: engage it, love it, and redeem it.

He said man was made to subdue, or harness, the natural world, to take control of its resources and build things. This includes any vocation, from planting crops to designing computers or composing music. Many people view aspects of culture, such as movies, music, or certain careers, as “bad” simply because they are not labeled “Christian,” he said. But he reminded the audience that all of these things are under the auspices of God’s creation. God created the world, everything in it, and with it the drive and inspiration to create.

“What does it look like when we have healthy families, when we have Biblical views on business and economics and the law and politics?” he asked rhetorically. “We redeem them instead of letting Satan, the prince of power, drain the life out of them.”

Lecrae shared how he found God’s grace as a college student through the ministry of a person from a completely different cultural background. The person did not judge him because of how he lived or the culture he came from. He was not disgusted by Lecrae’s lifestyle but instead saw someone who God loved and could redeem. Since beginning a relationship with Jesus Christ, Lecrae’s life was transformed, and he said that is the power of God’s redemption picture.

“You are a representation of God’s heart, mind, and character in this world. You are his workmanship,” he said. “His blood was spilled out for your redemption and you are a picture of that redemption in this culture. So whatever you are, you demonstrate what redemption looks like. You take law, you take politics, you take science, you take medicine, and you redeem them for the glory of God.”

“There is always that struggle with how you make your job a ministry,” she said. “(The message) was very relevant and explained how to engage culture and put Christ in your job.” 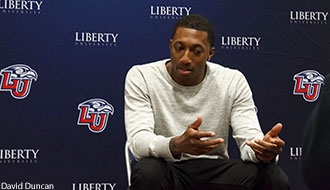 Lecrae took time to enjoy some of Liberty’s world-class recreation opportunities, hitting the slopes at Liberty Mountain Snowflex Centre with his son.

While preparing for his concert, Lecrae reminisced about his past visits to Liberty, from a small show in a classroom early in his career to a concert in the old Schilling Center in 2009 and now having the opportunity to speak to more than 10,000 students.

He said Liberty is “a respected academic institution” where Christians can reinforce their faith and receive “a prime-time, Grade A education.” It’s a place, he said, he would want to send his own kids.

“When a school heralds doing well at your craft and seeing things from God’s perspective, I think it is a brilliant marriage that produces the type of people that ultimately change the world.”