Liberty University broke ground on its new Center for Medical and Health Sciences Friday, celebrating what Chancellor Jerry Falwell, Jr. called “the last piece of the puzzle” in his father’s vision to build a world-class university that would train Champions for Christ in all professions.

Foundation work begins next week for the 138,000-square-foot, four-story building that will house the proposed College of Osteopathic Medicine and an expanded School of Health Sciences. It is expected to be completed by Spring 2014, matriculating its first class of osteopathic medical students in Fall 2014. 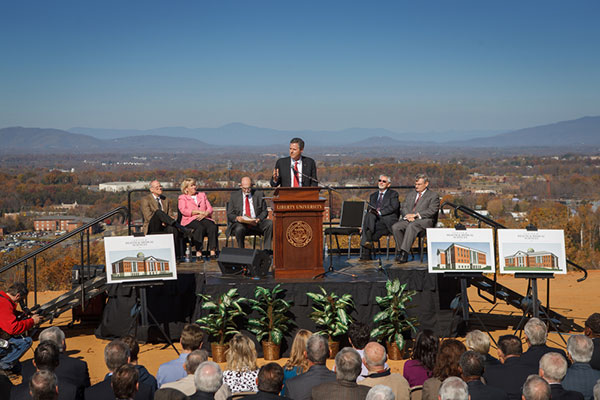 Byron, a member of the Tobacco Commission, along with Vice Chair, Sen. Frank Ruff, presented a check for the commission’s total planned contribution of $20.5 million, “one of the largest investments in the history of the commission,” Byron said.

“Today we mark the beginning of something that will be of great and lasting benefit to the people of our region and improve our community’s quality of life for generations to come,” Byron said, noting the new center will serve as “the centerpiece of and the magnet for a burgeoning health care industry, providing for the needs of our region, and attracting more here.”

The center is expected to create an additional 400 new jobs in the next five years.

Byron called the project a testimony “to the vision of Liberty University’s leadership, its board and the entire campus community.”

“They see the potential of our region and our people, they understand our needs and the needs of our world at large, and they have the drive and commitment to put their vision into action. … It’s further evidence that Liberty is a world-class university,” she said.

Dr. Ronnie B. Martin, dean of the proposed College of Osteopathic Medicine, introduced his staff and thanked Liberty’s leadership.

“Recognizing that 67 percent of the patients in Southern Virginia live in medically underserved areas, that the economies of the regions have suffered since the decline of tobacco, textile, and coal over the past two decades, and that the nation is facing a shortage of up to 220,000 physicians by 2030, all these visionaries also believe that the college will make a difference in the lives of hundreds of thousands of our fellow citizens, and that our graduates will contribute not only to the quality of life for the people they serve, but to the economy of the regions they serve.”

The first class will have about 150 students, he said.

“I am confident that there will not be a better designed, equipped, or more technologically advanced medical college in the United States than what we’re developing right here on this campus,” Martin said. “I know there are schools that will rival us, that will try to imitate us, but I promise you that none will exceed what we will be able to offer our students.”

The program will train students to “focus on primary and community-based practices,” to “recognize the needs of patients across this nation and across the globe,” and will expect them to “demonstrate a commitment of service toward their fellow man and remain focused in the Christian values of integrity and professionalism, while being educated to provide ethical, compassionate, competent, and patient-centered medical care” with Jesus Christ, the Great Physician, as their role model, he said.

Chancellor Jerry Falwell, Jr. thanked everyone involved in the project, including the Board of Trustees, many who have served for decades.

“I’m thrilled all of you are getting to see the fulfillment of the dream and the vision take place,” he told them.

He said he is humbled by how so many people have contributed to the project — “the completion of a circle.”

“We knew the time had come to do this because there were so many signs that were providential — the right people were sent here, the Tobacco Commission so graciously helped us out … all the factors came together,” he said. “It couldn’t have happened without everything falling into place, without God’s intervention.”