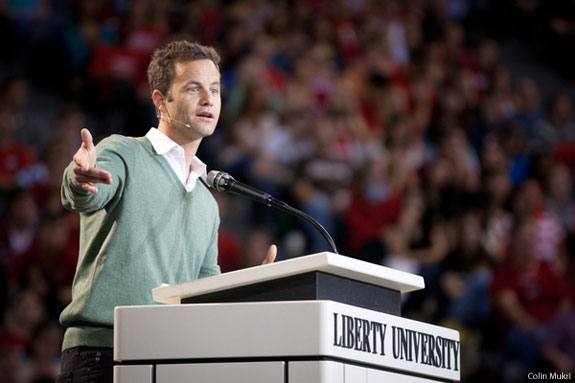 Actor/producer Kirk Cameron received a warm welcome at Liberty University Convocation on Friday — more than what he expected from the 10,000 students who weren’t even born when he starred as Mike Seaver on ABC’s “Growing Pains” in the 1980s.

But Cameron has perhaps left an even larger mark on culture than he did in the days he appeared on the covers of teen magazines. Students no doubt know him as the inspiration for “Fireproof,” the highest grossing independent film of 2008 that focused on the importance of Christian values in marriage, as a star in the “Left Behind” movies, created from the bestselling books by longtime Liberty supporter Tim LaHaye, and as producer of the new documentary, “Monumental: In Search of America’s National Treasure.”

Though Friday’s Convocation began with a fun surprise for Cameron on his first visit to Liberty — the Campus Praise Band sang the theme song to “Growing Pains” — he was serious in sharing his personal testimony as a “recovering atheist,” acknowledging Christ as his savior when he was 17 and then sticking to his convictions.

In his sports car on the side of a street in Hollywood, he told God: “I’m an actor, I know how to pretend.  … I want to be the real thing.”

“I knew I had to come to God on His terms or it was no good,” he said. “My whole life as a celebrity revolved around my terms. If you or someone else wanted a meeting with me you had to go through my agent or manager. … But I knew as a star of ‘Growing Pains’ sitting in my sports car wanting to talk to the God of the universe, I would not be the celebrity in that relationship. … I needed to come to him on His terms — and that is humility, repentance, and absolute trust and faith in Jesus Christ as my Lord, the ultimate authority, and my Savior — the one who would provide what I need.”

He knew the choice could cause rifts in his career, but now he is grateful.

“I am so thankful for the jobs I didn’t get. I am so thankful that I’m still alive unlike some of my coworkers and friends I grew up with in Hollywood … we auditioned for the same parts. And now through suicide, overdose, or just plain poor choices many of them are dead and just not doing well. I thank God that He saved me and put me on a different path and agenda.”

That agenda has included impacting a worldwide audience for Christ. Through marriage seminars and speaking engagements across the country, as co-host of The Way of the Master television series, and through interviews with major television news networks, he has shared the Gospel and stood on the convictions of his faith more than ever before.

His passion to uphold the values of America’s founding fathers led him to produce “Monumental,” a documentary that goes back to England, tracing the steps of those who laid the groundwork for a great nation — with their faith at the center.

“They brought with them the principles that we have now become famous for and the things that have made us so successful and prosperous — things like limiting the power of government …. electing our own leaders, representatives to represent us, … the free enterprise system, religious and political freedom, freedom of speech. They built the nation from the bottom up, not the top down. It’s from the inside out beginning with a transformed heart. This is what made us so unique in all the world.”

Cameron’s visit to Liberty helped kick off Homecoming Weekend and two Liberty alumni couldn’t have anticipated his visit more. Dawn (’08) and Robert Norman (’07) and their children spent a week with the Camerons at Camp Firefly in Georgia last summer, a weeklong, all-expenses paid retreat Cameron and his wife started for seriously ill children and their families. The Normans’ son, Nathan, 5, has brain and spinal cord cancer. The family lives near Lynchburg and their son’s story has been featured in local news and on ABC World News on Sunday, Sept. 30.

The Normans had a chance to reunite with their friend backstage minutes before he spoke.

“They’re amazing people. They take care of everything for you there (at the camp). They’re right there with you,” Dawn Norman said of the Cameron family.

Kirk Cameron was accompanied to Liberty by his 15-year-old son, one of his six children.

He said Liberty certainly looked like an “attractive” option for them.

He told students: “I know there’s such an amazing amount of time, effort, prayer, from so many of your parents, your family, to have you here. And you’re in such a good place, you’re in a place where there’s been a spiritual legacy and a heritage that’s being passed down to you, through so many who have invested their lives to teach the next generation. You: you’re their hope … to walk into this world and change this world, to bring heaven to Earth, to see this world become more heavenly through you and your commitment, through what you learn and what you do with what you learn."

Though Friday was Cameron’s first visit to Liberty, it wasn’t the first time Liberty students have heard from a Cameron. His sister, Candace Cameron Bure, who starred as a child on TV’s “Full House,” spoke at Liberty last year.