Liberty ranks No. 7 in nation for enrollment 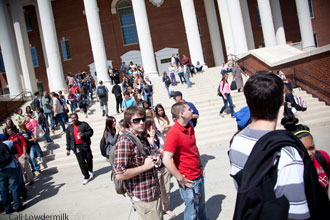 As Liberty University continues its rapid growth, it has now become the nation’s seventh-largest four-year university and the largest college in Virginia (two-year and four-year) by head count, according to the latest data from the U.S. Department of Education.

Reports confirm Liberty continues to be the largest, private four-year, nonprofit university in the United States and the world’s largest Christian university.

Resident enrollment at Liberty for the Spring 2012 semester was 11,953.

Liberty’s accelerating growth is largely fueled by its booming online education program, which has more than doubled since 2009. In April, Liberty University Online hit 75,000 students enrolled. That number climbed to 78,000 this month.

“As part of Liberty’s Christian mission we have sought to make Christian education affordable and accessible for as many individuals as possible,” Chancellor Falwell, Jr., said during his May 12 Commencement speech. “Liberty University Online has achieved that objective like nothing else could.”