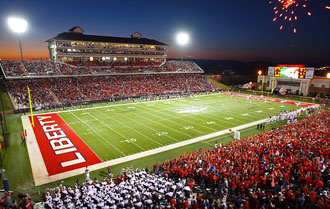 During the last six months, Liberty University has worked with Carr Sports Consulting, LLC, to conduct an exhaustive analysis of its athletics and University programs.

The expansive FBS Feasibility study examined all facets of the University to see if Liberty University is capable of meeting the demands of competing at the highest level of NCAA Division I competition.

Falwell, along with Liberty University Director of Athletics Jeff Barber and Bill Carr will hold a press conference on Monday to further discuss the findings of the FBS Feasibility study.

The press conference, which will be open to both members of the media and the general public, will be held in the Club Pavilion of the Williams Stadium Tower at 1 p.m. (EST).

Chancellor Jerry Falwell, Jr. released this statement: "Competing at the highest levels of collegiate competition has been the vision for Liberty University since its founding in 1971. It is exciting to watch the fulfillment of that dream taking shape as Liberty now has the financial resources, facilities, academic support and athletics professionals necessary to move forward."