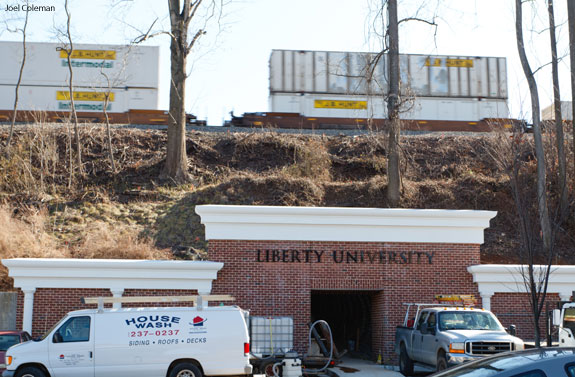 Workers installed a sign and put the finishing touches on the Wards Road side entrance to the new pedestrian tunnel on Thursday, Jan. 19.

The new pedestrian tunnel connecting the Liberty University campus to Wards Road will open at noon on Friday, Jan. 20.

The tunnel was built to accommodate the needs of the nearly 7,000 students who live on campus, giving them easy and safe access to restaurants and stores along the busiest corridor in the City of Lynchburg.

The tunnel will only be accessible by those with a Liberty-issued Flames Pass. While it will be open at all times, commuter students, faculty and staff will only be able to enter the tunnel from the campus side; they will be allowed to return from the Wards Road side the same day they enter and up until 3 a.m. the day after. Students who live on campus will be able to enter both sides at all times. Each person must swipe his or her Pass (no piggybacking will be allowed).

Construction on the 160-foot-long tunnel began in June 2011. Digging was completed in October 2011 and crews have been working long days to make sure it is open for the start of the spring semester.  A fence is now being constructed along the railroad that will eventually make it impossible to cross the tracks except through the tunnel.

The tunnel includes a 7-foot-wide walkway with handrails and lights, similar to the tunnel under U.S. 460 on Liberty’s East Campus. It runs under existing railroad tracks and conveniently empties near the new pedestrian bridge that opened on Wards Road in October 2011. That project was a partnership with the City of Lynchburg; the city paid more than 90 percent of the cost. A study conducted by the city estimated nearly 700 students crossed the busy road each day.

“It was the team effort of everybody — the railroad, Liberty University, City of Lynchburg … a culmination of trying to give these kids a good, safe travel path to get them where they want to go,” said Charles Spence, Liberty’s director of Planning and Construction.

Chancellor Jerry Falwell, Jr. said, “We appreciate the cooperation of Norfolk Southern Railway for allowing Liberty to tunnel under one of their main rail lines on the east coast of the U.S.  It was a true feat of engineering to accomplish such a difficult task safely and so inexpensively.  Charles Spence, Guyer Brothers Construction and Danville Drilling of Danville, Pa., accomplished what many believed to be an impossible task and now others are studying the innovative techniques used in the construction of this tunnel.”

From the campus side, the tunnel can be accessed from a walkway across from Dorm 8 and from the intersection at Reber-Thomas Drive. Access from behind the Vines Center will not be available until later this fall, due to construction planned for the Vines Center and the new Jerry Falwell Library.