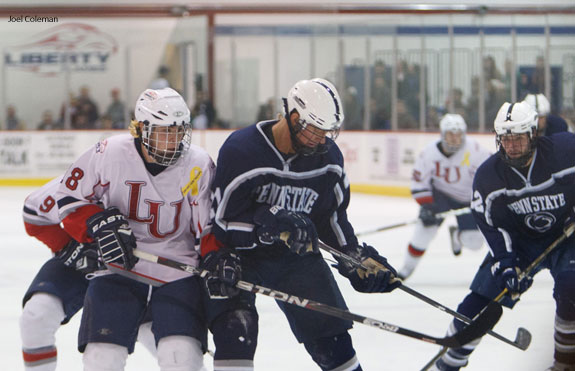 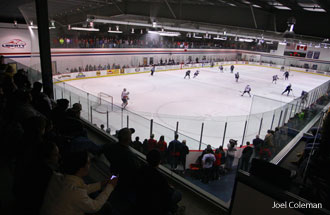 Liberty University's men's division 1 hockey team knocked off No. 1 Penn State on Friday, 4-3, at Liberty's LaHaye Ice Center. Liberty was ranked No. 8 in the American Collegiate Hockey Association (ACHA) going into the match.

The Icers came to Liberty with one loss on the season so far. The team will play next year in the NCAA division 1 level.

"A strong showing this weekend sets us up for a good second half of the year, leading up to the tournament in March," said head coach Kirk Handy. "It's a big confidence booster knowing we can beat the No. 1 team in the country."

He said Friday's win will likely boost Liberty in the ACHA rankings, due to release Dec. 16.

Liberty dropped its second game to Penn State on Saturday, 4-2.

"I thought our team played the two best games on back-to-back nights. That's our strongest showing for the season so far," Handy said. "We won one and played a very close second game. Our hope is it will move us up two spots for sure."

With a 15-6-3 record, Liberty is set to play its next game at Stony Brook on Jan. 7. The next home game is Jan. 27 against Oakland University.

Liberty's women's hockey team is also having a banner year, currently ranked No. 1 in the ACHA. Liberty’s win against defending ACHA champion Michigan State and two wins against No. 2 ranked Robert Morris earlier this season helped boost the team to the top spot. Read a story on Liberty's high-powered offense on the ACHA website.

Hockey is one of 29 men's and women's club sports teams at Liberty.