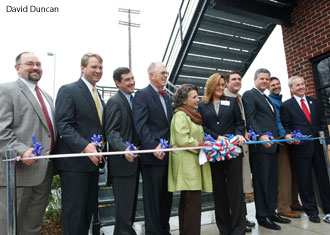 A bridge has always been the sign of collaboration and partnership, and today those two words were spoken many times at a ribbon-cutting ceremony for the new pedestrian bridge on Wards Road.

The 104-foot bridge, completed last month, spans from Panera Bread to Sam’s Club, and was a joint project with the City of Lynchburg and Liberty University.

Lynchburg Mayor Joan Foster kicked off the ceremony, attended by Liberty Chancellor Jerry Falwell, Jr., members of Lynchburg City Council, business representatives, architects, construction crews and planners involved in the project, by asking for a moment of silence for Liberty student Hannah Williams who was killed in a tragic accident on a train trestle Nov. 17. Her funeral is today in Sanford, N.C.

Foster said students’ safety was the main motivation for the bridge project. In a study conducted by the city, she said 700 Liberty University students crossed the roadway in one day.

“We are extremely pleased that they will be much safer than before. It was just the right thing to do,” Foster said.  “ … The pedestrian bridge is tangible evidence of the benefits of collaboration, of private/public partnerships. … Together we were able to find a workable solution for this extremely busy part of the city, in a cost-effective manner.” 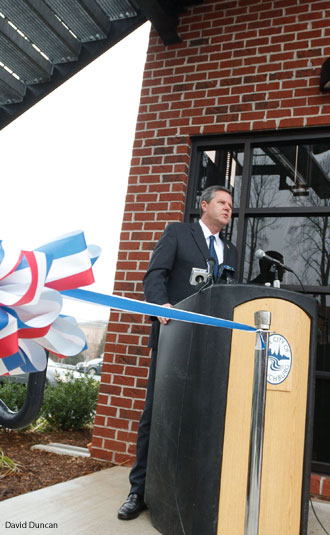 Chancellor Jerry Falwell, Jr. thanked all the parties involved for creating an effective solution to a major problem.

“I think it’s a real testament to our city that it would take measures like this to keep students safe, to keep the general public safe. … We are honored to have this partnership with the city,” he said.

He thanked city officials for “finding the money in tough budget times to make this bridge a reality.”

The city has funded $1.35 million of the estimated $1.5 million project, with Liberty paying the rest and offering the full services of its Planning and Construction Department, which has been involved from its conception to completion.

Liberty has taken more steps to ensure students have safer and easier access to Wards Road businesses. A new pedestrian tunnel is currently under construction under the railroad behind the Vines Center. It empties out just behind the new pedestrian bridge on the Panera Bread side. Falwell said that project “would not have been effective without this bridge.”

Lynchburg City Council approved the pedestrian bridge project in May and construction began in July. The bridge was completed last month.

While the city owns the bridge and will pay for capital repairs, Liberty has responsibility for day-to-day minor maintenance.

The bridge is 8 feet wide, a comfortable distance for two-way foot traffic. It has an elevator and is fully handicapped accessible. It can also accommodate bicycles.

Many Liberty University students are excited about the new pedestrian bridge over Wards Road, which opened last month and was formally dedicated today, but sophomore Tim Woods appreciates the safer walkway more than most.

Woods has a visual handicap called nystagmus blockage syndrome, which prevents his eyes from judging distance or focusing on moving objects, especially when those objects – like cars– are moving at high speeds.

He lives on campus and said he has crossed the busy intersection whenever he needs groceries from Walmart.

“You have to stand there and wait and then run like crazy … then it’s even worse coming back because you have your arms full of everything you bought,” Woods said.

Since Woods is unable to drive due to his condition, the new bridge will make it easy for him to get to stores and restaurants on the other side of the intersection -- and it will give his parents, Rich and Linda Woods, peace of mind.

“He would tell us about making that mad dash across Wards Road where there’s no crosswalks, and with his visual handicap that scared the tar out of me,” said Rich Woods, Tim’s father. “I was concerned about basic safety, not just for my student, but for other students.”

Tim’s parents voiced their concerns to Liberty’s Parent and Family Connections Office. They were pleasantly surprised this summer when they read an article on Liberty’s website announcing the bridge’s construction, and took time to thank Liberty staff for taking on the project.

“It shocked me that a school as large as Liberty cares enough to think about that. I really appreciate the way the school isn’t just there to teach the kids -- it’s there to train them not to be just good Christians but to be good citizens, and this is one of the ways,” Rich Woods said.

Tim Woods said since the bridge is now open he plans to make trips to the other side of Wards Road more often.

“I can get more things and I’ll be able to get across more easily and at a leisurely pace,” he said. “I think it’s a great thing and it will be helpful … they care that some students don’t have cars or are unable to drive, so they’re providing alternate means of getting across busy streets.”