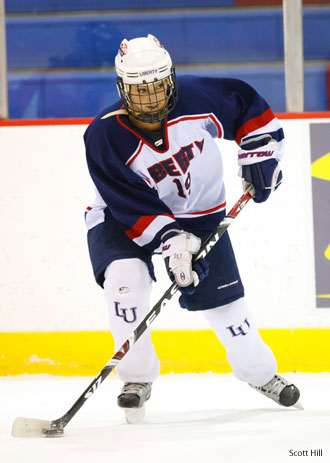 With a 10-1 record on the season, Coach Paul Bloomfield said the team has a shot to win Liberty’s first national title in women’s hockey.

“It’s pretty exciting. Everybody’s working really hard. We’re going to have our hands full because we have a thin bench, but as long as everybody can stay healthy, we have a good chance, a good run for the national championship,” Bloomfield said. “We appreciate all the school’s done for us and all our fans.”

He said Liberty’s win against defending ACHA champion Michigan State and two wins against No. 2 ranked Robert Morris earlier this season likely boosted the team to the top spot.

The next ranking will be released by the middle of December. The top 10-ranked teams will face off at the national championships in March.

Liberty is scheduled to play its next game on Saturday against Grand Valley University in Grand Rapids, Mich. and will face the University of Michigan on Sunday. Their next home game is against the Reston Raiders on Jan. 28, followed by a big weekend of play against top-ranked teams Robert Morris and Rhode Island in February.

The women’s hockey team is one of the 12 women’s club sports teams offered at Liberty.