Liberty University today announced construction of a new Jerry Falwell Library, which will serve as a study and research center for the school’s evolving main academic campus.

The new four-story, 170,000-square-foot building is part of a transformation of Liberty’s campus announced earlier this year by Liberty President and Chancellor Jerry Falwell Jr. that will add 500,000 square feet of new academic space.

Falwell Jr. succeeded his father, the Rev. Jerry Falwell, as Chancellor in May 2007. The Rev. Falwell was the founder of Liberty University and founder of Thomas Road Baptist Church.

In addition to a state-of-the-art library named for Liberty’s founder by the Board of Trustees Tuesday, the new building will contain a museum that will memorialize his life and ministry. 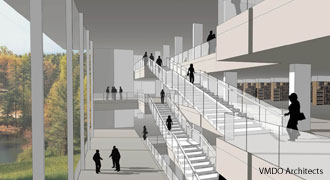 In the past four years, Falwell Jr. has overseen dramatic growth in the school’s residential and online programs and significant enhancements to the school’s campus and financial infrastructure. Liberty has spent more than $150 million on facilities improvements since 2007.

The new $50 million library will embrace Jeffersonian architecture, which was the favorite of Rev. Falwell and his son and part of the cultural identity of Central Virginia. The new library is the largest building project ever planned at Liberty University. Construction is scheduled for the spring 2012.

It will be adjacent to a new commons area, which will be bigger than the lawn at the University of Virginia. It will also overlook a new lake located behind the Vines Center, the University’s basketball arena and convocation center.

The new library will be a bridge to the future in terms of academic research and study space. The main entry floor will provide the latest in computer lab technology, research assistance and customer service, while the upper floors will be primarily quiet study areas. An open four-story atrium will rise from the museum and through three floors of learning commons areas, an open two-story traditional reading room, terraces of study spaces inside and outside, and an open two-story food court to provide dining service for the more than 2 million visits expected to this facility each year.

Based on surveys of students and faculty, the library will include electronic resources and the traditional print book collection, which will grow to nearly a half-million items. A new robotic storage and retrieval system will allow students to search for a book in the library catalog, use integrated technology to electronically view the books next to it on the shelf, electronically browse the pages of the book to decide if they want to use it, and have it delivered to a desk in less than five minutes.

The new system will allow the library to use only 7 percent of the square footage for collections, 67 percent for student research and study spaces and 26 percent for other uses.

An area has also been designed for graduate students and faculty, where they can reserve study spaces and collaborate on their research as it develops. The research can then be distributed through the library’s Digital Commons.

“This and other multi-purpose spaces within the library will bring our faculty and students together in the pursuit of wisdom and God’s truth,” said Carl Merat, dean of the Integrated Learning Resource Center (the present name of Liberty’s library system). 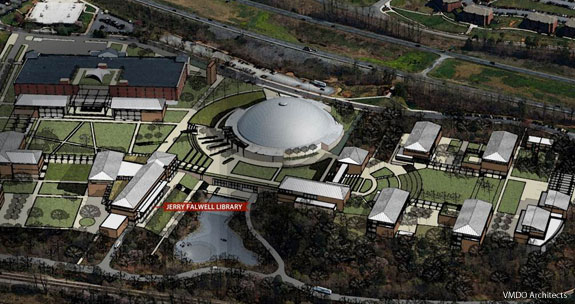 This rendering shows what Liberty's campus could look like in the next five years.