For one of the first times since he announced his run for presidency, Texas Gov. Rick Perry talked about his “faith journey” today – and at no more of a fitting place than Liberty University, the world’s largest Christian university.

Perry, the front-runner for the GOP nomination for president, spoke for 20 minutes to more than 10,000 students in Liberty’s convocation, a tri-weekly gathering of the student body in the Vines Center, the school’s basketball arena. Media presence was heavy, with representatives from major news agencies, including The Washington Post, New York Times, NBC, ABC, FOX News and C-SPAN, which recorded the entire event. International press from Korea, France and Germany also attended.

Perry’s talk was filled with advice and encouragement for students, weaving in tales of his humble past as a member of a Texas farm family, and including his own college experience at Texas A&M University.

Growing up, he said he did not know as a child that his family was “not wealthy in a material sense; I know we were rich in a lot of things that really mattered, in a spiritual way.”

He told of not having a clear direction for his life until he learned the lessons of Scripture. 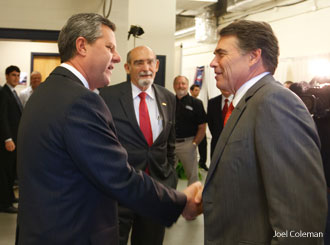 “I wasn’t one of those people who knew at the age of 12 that he wanted to be doctor, a lawyer, or for that matter a governor or a president. I spent many a night pondering my purpose, talking to God, wondering what to do with this one life … what I learned as I wrestled with God was I didn’t have to have all the answers, that would be revealed to me in due time, and that I needed to trust Him.”

He said his “faith journey” was not about “someone who turned to God because I wanted to – it was because I had nowhere else to turn.”

He was 27, had been an officer in the U.S. Air Force, “telling men and women what to do” but was “lost spiritually and emotionally – and I didn’t know how to fix it.”

Except for the sounds of camera shutters, the arena was quiet as Perry explained what a faith in God means to his life.

“As spiritual beings we are meant to live in relationship with our Creator and with one another — and the happiest moments I’ve ever experienced are when I am in communion with God and in community with others,” he said.

He encouraged students to trust God as he has: “Do not fret if you don’t know your place in the world yet or what you want to be someday. … Trust that God wouldn’t have put you here unless He had a unique plan for your life. … He knows you by name; you’re never alone, even when you feel like it, and he doesn’t require perfect people to execute His perfect plan.”

He cited Paul writing to Timothy in the Bible, warning students not to “live in fear; live in faith. Don’t fear the judgment of others or the uncertainty of the future. Don’t muzzle your voice because you’re young. … You have the right like every American to speak your mind, you have the right to insist on change, to tell the people in power that you will not have your inheritance spent … Your voice matters; use it. This country is your country as well.”

He received the loudest applause toward the end, when he said, “Don’t leave it to a bunch of Washington politicians to tell you how to live your life.”

“This is your future we are debating today; don’t be silent,” he told students. “When you use your voice, let your words be characterized by grace, humility and truth.”

With Perry’s visit, Liberty has hosted four of the eight candidates for the GOP nomination in convocation. Herman Cain spoke in 2009; Newt Gingrich, who has visited Liberty several times, last spoke in October 2010; and Ron Paul spoke in 2008 when he was a candidate for president. Minnesota Rep. Michele Bachmann is scheduled to speak at Liberty on Sept. 28.

“We invite all of the candidates to speak here,” said Chancellor Jerry Falwell, Jr. “We invited President Obama when he was a candidate; he sent a surrogate. We want our students to be able to take advantage of the fact that we are the largest Christian university — and one of the ways we allow them to do that is bringing in national leaders, letting them hear firsthand where they stand on the issues.”

He said Liberty’s non-profit status does not allow it to endorse any candidate and he has not made a personal endorsement. Perry was invited before he announced his candidacy in August, Falwell said. 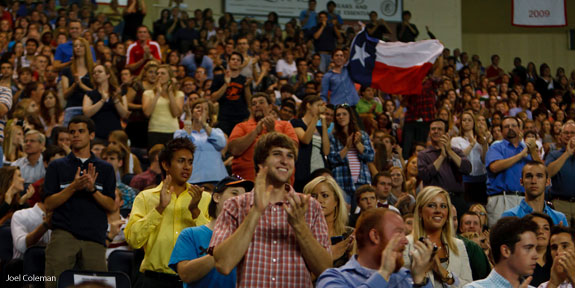 Texas Gov. Rick Perry’s visit to Liberty University Wednesday sparked much conversation amongst the student body, many of whom will have their first opportunity to vote in a presidential election next year.

“Instead of choosing to make it a political forum, he chose to speak from his heart,” said Junior Zachary Grafman. “He talked about what he believed in as opposed to what he didn’t believe in or who he didn’t like.”

Throughout Perry’s speech, students cheered when he mentioned that he would lead the country based upon the Christian principles our forefathers desired.

“I will consider voting for him because he has good Christian values and I support him for his pro-life beliefs,” said freshman T.J. Stump.

Although some students did not indicate that they favored Perry for president, many just enjoyed the opportunity to hear from a presidential candidate.

“It was really interesting to see where Rick Perry came from and his background to get a feel for who he is as a person, not just his political platform,” said sophomore Tabitha Mallinson.

Many students said they want to vote for a president who can make changes in the economy regarding the recession and the budget.

“Our country has gone downhill and is in a state of crisis with the budget. What I know of Rick Perry is that he seems to be really genuine and has done great things in Texas,” senior Erica Weston said.

“Hopefully what people see is that Perry is a conservative governor who can lead this country through the recession and beyond that.”

“I feel like I have a better grasp on how the system works. … I realize the very real impact that our president has on our nation. By having the right leaders and right people in political office, we have the opportunity to further the gospel.”

Swanson said she believes students don’t always make a connection with the power politicians have to solve social and economic problems.

“My hope is that people don’t walk out of here apathetic, thinking that they just heard another political speaker, but understand the gravity and weight of the future decisions Perry can make.”