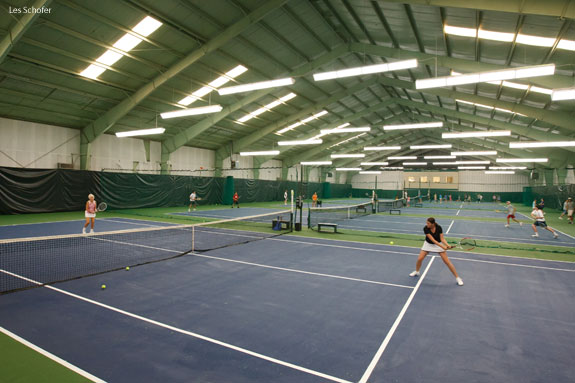 The Sports Racket, an indoor tennis and racquetball facility in Lynchburg, is officially re-launching on Saturday, July 9 after undergoing extensive renovations.

From noon to 5 p.m., guests are invited to tour the facility and will have a chance to play for prizes and ask tennis pros for advice.

Liberty University received the facility as a donation from Sherwin Cook, a Board of Trustees member, in February. The property, located off Wiggington Road, is about a 15-minute drive from Liberty’s campus. It will remain open to the Lynchburg community and will continue to operate as usual for its nearly 300 members.

Improvements to the 35-year-old facility include renovations to the five tennis courts and five racquetball courts, lights and air conditioning system. The lobby and locker room have also been remodeled. The facility also has a gym with several treadmills and weight equipment and a tanning bed.

Liberty students will be allowed to use the facility for free in the late evenings as it expands its hours to 11 p.m. Monday through Friday and Sunday. The facility will also be the home of Liberty’s new racquetball club sports team.

Later this summer, personal trainers will be available for contract with members.

The Sports Racket opened as Central Virginia Indoor Tennis and changed to its current name in 1984.