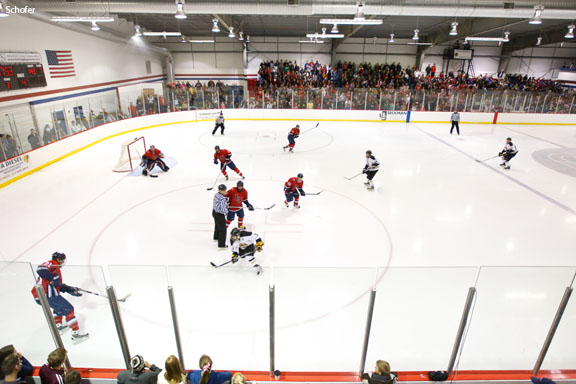 This hockey season, the Liberty University Flames have edged their competition before even stepping onto the ice. With the recent addition of a women’s Division II hockey team, Liberty has become the first and only university in the American Collegiate Hockey Association to have one team in each of the league’s five divisions.

The puck drops for the men’s Division I hockey season Friday, Sept. 17 at 7:30 p.m. in the LaHaye Ice Center, as the Flames take on Adrian College.

“We think Adrian is going to be a top-10 team in the country this year, so this will be a great game,” Handy said.

Liberty has had a men’s hockey team since 1985, and for much of that time players and coaches were forced to travel to Roanoke every week for practice time on an ice rink. Then in 2006 a generous donation from Drs. Tim and Beverly LaHaye allowed the university to construct the LaHaye Ice Center on Campus North. Since that time, Liberty’s hockey program has grown to five teams and the university has added synchronized skating and figure skating to its club sports offerings.

“Having our own ice rink on campus has really allowed us to propel the hockey program forward,” Handy said. “Our goal is to continue improving both on the ice and in the classroom.”

Student-produced hockey game to be re-aired

The first live fully produced sports coverage by Liberty University students will be re-broadcast at 7 p.m. today (Sept. 16) on the Liberty Channel.

The Blue-White men’s hockey game from Sept. 10 at the LaHaye Ice Center can be viewed as streaming video on the Liberty Channel anywhere in the world.

The only non-students involved in the broadcast are the game’s announcers.