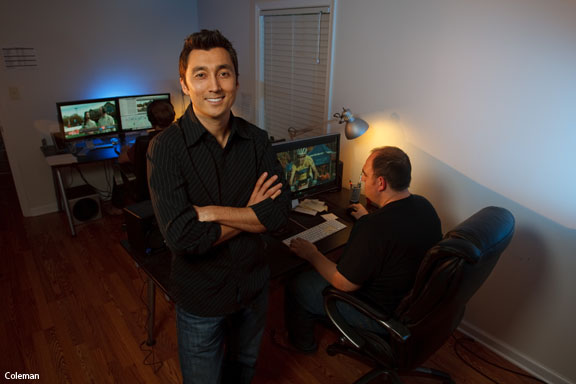 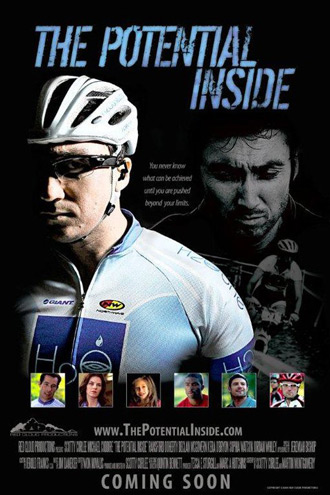 This fall, moviegoers will spot familiar sites around Liberty University’s campus on the big screen.

The Potential Inside, an independent Christian film produced by Liberty alumnus Scotty Curlee (’96), was filmed in Lynchburg, Va., with some scenes shot on Liberty’s trail system and at the Liberty Mountain Snowflex Centre. The family-friendly movie tells the life story of a professional mountain biker and coach.

Curlee used the acting and production talents of Liberty students and professional mountain bike racers. He said the goal was to produce a quality, inspirational film on the same scale as the recent Christian films Fireproof and Facing the Giants.

In the film, retired cyclist Chris Carmik (played by Curlee) faces a world laced with grief and regret following a tragic automobile accident. He is presented with a challenge — to coach an inspiring professional cyclist, Jake, and transition his potential into success.

An avid cyclist who raced in the Olympic trials in 1992, Curlee recognized that the similarity between living a fulfilled life and training for a professional mountain biking career would resonate with moviegoers.

“What we wanted to do was stay true to the Christian values, but reach a demographic that we could cross over, like sports and Christianity.”

Curlee said he plans to have The Potential Inside released in select theaters later this fall.

Curlee, whose father served in the U.S. Army, grew up in South Korea. In 1987, he began attending Liberty Christian School, founded by Liberty alumnus Joe Hale (’77, ’92) near the U.S. Army base, Camp Red Cloud, in Korea. Curlee attended the school because his parents wanted him to receive an English education. In addition to an American education, Curlee was taught biblical principles that would lead him to a relationship with the Lord, and later to attend Liberty University.

“Dr. Falwell started something [in Lynchburg], a graduate [Hale] goes halfway across the world, and here I am back in America,” said Curlee.

After graduating from Liberty, Curlee married his wife, Michele, also a Liberty alumnus, and entered a career as a pharmaceutical representative. After several years in the pharmaceutical field, Curlee began pursuing other career directions.

“I was becoming increasingly unfulfilled,” he said. “So at that time God was opening doors — allowing me to meet people. You know when the Lord is leading you because doors open that shouldn’t open.”

“What I learned was that I didn’t want to do the Hollywood culture and lifestyle,” he said. “What I wanted to do was create something innovative where we could foster and share what we believe.”

As a result, Curlee established Red Cloud Productions in Lynchburg.

“Our motto is ‘Changing the world through cinema,’” said Curlee. “We want to put positive, redemptive stories out there, but we want to do it right here in Lynchburg.”

Red Cloud Productions has additional films slated for production, and because of its proximity to Liberty, plans to continue to use the talents of Liberty students.

“There’s an amazing amount of talent [in Lynchburg],” said Curlee. “There are young people who are focused on making a difference in the long run, which is furthering the gospel message and standing up for Christ. What better place to be than to produce films right here.”